THE DANGEROUS TIDE OF RUSSOPHOBIA 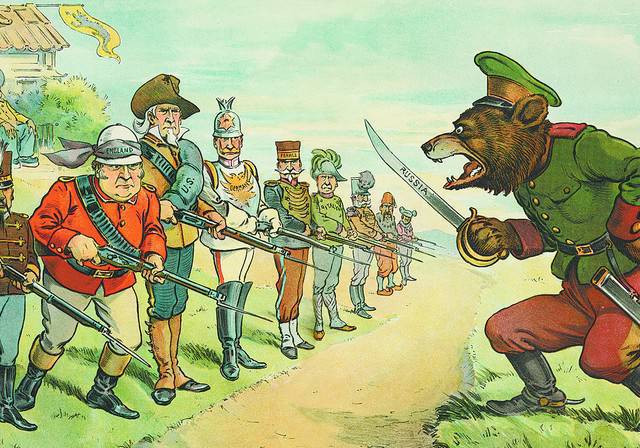 Putin’s invasion of Ukraine should certainly be condemned by all on the left but the broader context of global rivalry and Nato expansion can’t be left out of the picture. Certainly, the present invasion shouldn’t held up as a unique act of aggression, while the even bloodier role of the US led Western powers, in such countries as Iraq and Afghanistan, is disregarded.

In this regard, a long simmering mood of Russophobia has now reached dangerous levels absurdity in the West. Those in power are certainly inflicting punitive and enormously damaging sanctions on the Russian economy but the extent to which a rising tide of xenophobic backwardness has emerged in response to this political lead is quite horrifying.

A comprehensive study of the scale and range of vindictive expressions of anti-Russian feeling that have been put into effect in Western countries would comprise of a sizable volume but a few examples will suffice here.  Earlier this month, Madrid's Teatro Real cancelled performances by the legendary Bolshoi Ballet in a ludicrous effort to register opposition to Putin’s invasion. Soprano Anna Netrebko was forced to cancel upcoming engagements with the Metropolitan Opera in New York City, when she refused to repudiate the Russian president.

No such coerced loyalty oath would have helped the noted Russian pianist, Alexander Malofeev, however, when he was cancelled by the Montreal Symphony Orchestra. He was not representing the Russian government and, indeed, has been a courageous critic of the invasion. He was, nonetheless, prevented from performing solely on the grounds of his nationality. Tchaikovsky’s responsibility for the attack on Ukraine is even more questionable, yet the Cardiff Philharmonic Orchestra went so far as to quash a performance of his music.

If the intended playing of the 1812 Overture, with its martial theme, was considered ‘to be inappropriate at this time,’ the Russian composer’s work offers a range of alternatives but these weren’t considered simply because the line of least resistance was to cave in to the present ugly mood.

If the cancelling of talented musical artists is shocking and deplorable, the present wave of ignorance is also replete with examples of ridiculous pettiness. In Canada, the provincial government of Ontario has pulled Russian vodka from the shelves because, as Premier Doug Ford put it with rhetorical flourish, “The people of Ontario will always stand against tyranny and oppression.”

A chain of restaurants in France faced a campaign of threats and intimidation because it served a dish called poutine from Quebec and this name sounds rather like ‘Putin.’ This particular business issued a clarification stressing that the similarity was purely coincidental but a restaurant back in Quebec has actually removed poutine from its menu for the duration of the invasion to escape the backlash it has been subjected to.

Perhaps the depths of absurdity are to be found in the decision to cancel Russian language, history and dance sessions at St Wilfrid’s CE Primary School in Warrington. ‘Furious residents’ aggressively lobbied the local council to obtain this result. It is hard to imagine a more spiteful and futile way to lash out against the language and culture of another people because of the actions taken by a government. Yet, sadly, it speaks to the dangerous and disorientating impact that a carefully orchestrated mood of war fever can have.

The ability to counter this ugly mood is also, rather predictably, hampered by the readiness of social democratic parties to jump on the anti-Russian bandwagon with an unqualified enthusiasm they are unable to generate in solidarity with the Palestinian people and others in the firing line of the Western powers. Keir Starmer’s loyalty to the Nato alliance has, of course, reached the level of a shameless attack on the Stop the War coalition and a slanderous effort to present those raising voices for peace and de-escalation as a veritable fifth column.

Here in Canada, Jagmeet Singh, the leader of the New Democratic Party (NDP) has also proven himself a loyal servant of the geopolitical interests of Western imperialism. Indeed, he has actively pressured the Trudeau Liberal government to go further in imposing penalties and sanctions on Russia. In this way, ugly xeonophobic sentiments have been encouraged and intensified.

There are a number of previous examples of just how destructive such outpourings of backwardness can be, when they are whipped up by those in political power. The onset of World War One saw a hideous wave of anti-German hatred that served to line up mainstream opinion in favour of the slaughter that unfolded. In Canada, in 1916, ‘the southwestern Ontario community of Berlin ceased to be.’ The residents of the town ‘rooted in its century-old Germanic heritage was forced to deny its own existence.’ At the behest of ‘bullies and xenophobes,’ Berlin was humiliatingly renamed ‘Kitchener,’ an act that represented the kind of forced declaration of loyalty we are seeing today imposed on Russian artists.

When the people of European countries are subjected to an orchestrated campaign of hostility, fuelled by rivalry and war, the results are hideous enough. However, when overt racism is given an opening, matters become even more vile and reactionary. In both the US and Canada, during World War Two, the persecution of people of Japanese origin was as brutal as it was shameful. This led to internment, not simply of Japanese citizens, but of all those who were the descendants of immigrants from Japan, even if they held US or Canadian citizenship.

In British Columbia, 22,000 Japanese Canadians were effected by this racist initiative. Having first been subjected to mob violence, the community was then removed, after ‘a 100 mile wide strip along the coast was designated a ‘protected area’ by the federal government.’ For months, Japanese families were held in animal stalls before being shipped into the interior. Families were separated, with the men forced to work on road gangs and the women and children held in camps in wilderness areas.

The obvious more recent comparison we must draw on is the horrible intensification of Islamophobia that was ushered in by the war on terror. The impact of this exercise is still ongoing and needs little elaboration but it is a grimly instructive example of the violent passions that can be unleashed when political leaders and media work to whip up a lynch mob mentality towards a constructed ‘enemy within.’

The harsh truth is that the invasion of Ukraine is but one manifestation of an escalating global rivalry between the US led West and its key foes, Russia and China. Working class people in all the countries involved have no interest in this conflict. We should deplore an act of aggression like the invasion of Ukraine but we absolutely must not line up with ‘our’ imperialist side by giving support to the further eastward expansion of the belligerent Nato alliance. We work to build a movement that opposes war and that can defeat xenophobic war fever with international working class solidarity.