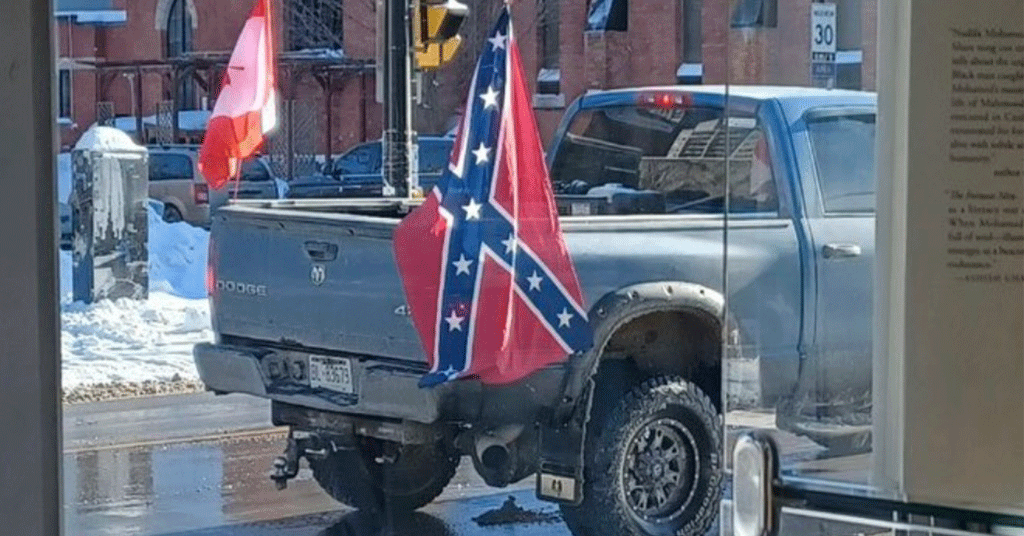 As state power is reluctantly and belatedly deployed against the far-right’s laughably named Freedom Convoy, it’s time for the political left in Canada to ask itself some very serious questions. How could a gaggle of white supremacists manage to capture the political momentum and undertake “the biggest protest organized by the Canadian far-right since the 1930s”?

It should come as no surprise, of course, that a reactionary expression of destructive rage like the Convoy enjoyed aid and comfort that would not have been extended to an Indigenous-led protest, an anti-racist action or, for that matter, a challenge to the deplorable conditions faced by the actual workers in the trucking industry.

Any legitimate effort to resist exploitation or oppression in this society would not have had a cheering section made up of Conservative politicians. Wealthy backers and right wing business interests would not have lined up to write cheques for its organizers. There’s also no doubt that the police would have taken a very different approach from the outset. Those challenging social injustice would not have had their way cleared for them by patently indulgent police forces, as was the case for the Convoy at least until the decision to clear them out was taken at the highest political level.

However, none of these factors change the basic issue we must confront. At a time when workers and communities are facing a ballooning social crisis and a volatile mood of uncertainty and anger exists, it was not the political left and the main working class organizations that mounted a mass protest. Instead, the most reactionary elements in society took the lead. This shameful state of affairs poses a threat with far-reaching consequences.

The state won’t save us

Any hopes that the trash removal operation recently implemented by the Liberal government will forestall the advance of the far-right are misplaced. This malevolent force is finding fertile ground precisely in the prevailing social conditions. As Bryan Palmer writes, the unleashing of special law enforcement powers won’t alter “the mentality of the lumpen petty bourgeoisie, and those stoking its politics of resentment, ramping up the rage, and validating a willingness to throw down the gauntlet of irrational resistance.”

While it won’t address the factors that gave rise to this convoy or prevent the consolidation of this ugly movement, the use of the Emergencies Act actually poses a far greater danger to our side. Indigenous land defenders, those taking to the streets to protest environmental degradation or racism, and workers fighting for their rights are far more likely to face the full force of this repressive legislation than overly enthusiastic actions by the far-right.

The conundrum, however, is that the only effective antidote to an emerging fascist movement is a powerful and inspiring working class alternative. To point out that this is lacking at the present time is to state the glaringly obvious—and I say that without a trace of disrespect for all those who are struggling in their workplaces and communities to try and build such a movement.

It was disheartening to see the Convoy assemble, make its way across the country and impose its ugly presence on Ottawa without any appeal by the trade unions to mobilize against it. With very few exceptions, such as the march in Ottawa called by the Public Service Alliance of Canada, the Convoy was not challenged by anything more than critical statements and indignant bleating. Indeed, the most effective action against the far-right was taken by Ottawa residents. Those who fought the Battle of Billings Bridge against the Convoy, blocked its path and forced its supporters to retreat showed us what could be done and what ought to have taken place on a far bigger scale. Others across the country also modeled forms of resistance, for example, those who used their bicycles to halt Convoy supporters in Vancouver.

The truth, however, is that the white supremacist initiators of the Convoy were able to act as they did because a political vacuum existed due to the relative passivity of the working class movement in these harsh and unsettling times. Their disgusting antics would have been reduced to Lilliputian insignificance by a movement that was fighting back on the issues that are affecting the lives of working class people in Canada. This passivity has to give way to militancy if we are to avoid dangerous consequences.

The frenzied anger of the “lumpen petty bourgeoisie” may be as ugly as it is destructive but it is clear and forthright. If it is allowed to function as the only radical political alternative, its influence can only take hold and grow. The present situation is producing a cost of living crisis in which impossible home prices and soaring rental costs play a major part. The enhanced income support that was generated earlier in the pandemic is now a thing of the past and this is “preparing Canadian workers for lower wages and a far more precarious future.” There is hardship and great uncertainty all across the country with no end in sight.

Efforts to challenge these injustices and create a critical mass of social resistance are underway in every part of Canada. In the wake of the killing of George Floyd, calls to defund the police and to put vital resources into meeting the needs of communities were taken up that still resonate. Indigenous land defenders are continuing their vital struggles. A united movement that defends its gains but leaves no one behind is both possible and essential.

The Convoy may now have been dispersed but a regrouping of the forces of the far-right is sadly inevitable. They have expanded their base and shown themselves capable of organizing bold actions that can inspire those receptive to their hateful message. A working class response to this threat is needed immediately.

Clearly, the trade unions have an outsize role to play here and there is a need for rank and file activists to step up the pressure on union leadership for serious action. However, the situation is too pressing to pin hopes on a patient lobbying of cautious and conservative union leaders. Across the country, there are thousands of people active in their workplaces and organizing in their communities. We need to be meeting and planning, laying the basis for the united struggles and creating the organizational forms that can carry them forward.

The social conditions that gave rise to the Convoy are not going to abate but will only deteriorate. They have already produced a major far-right action that has had a serious impact on the political life of the country. If the response to the societal crisis we face winds up being dominated by an emerging street army of the right and not a powerful movement of working class people, the outcome will be nothing less than catastrophic.