A CAPITALIST ROAD TO SOCIALISM? 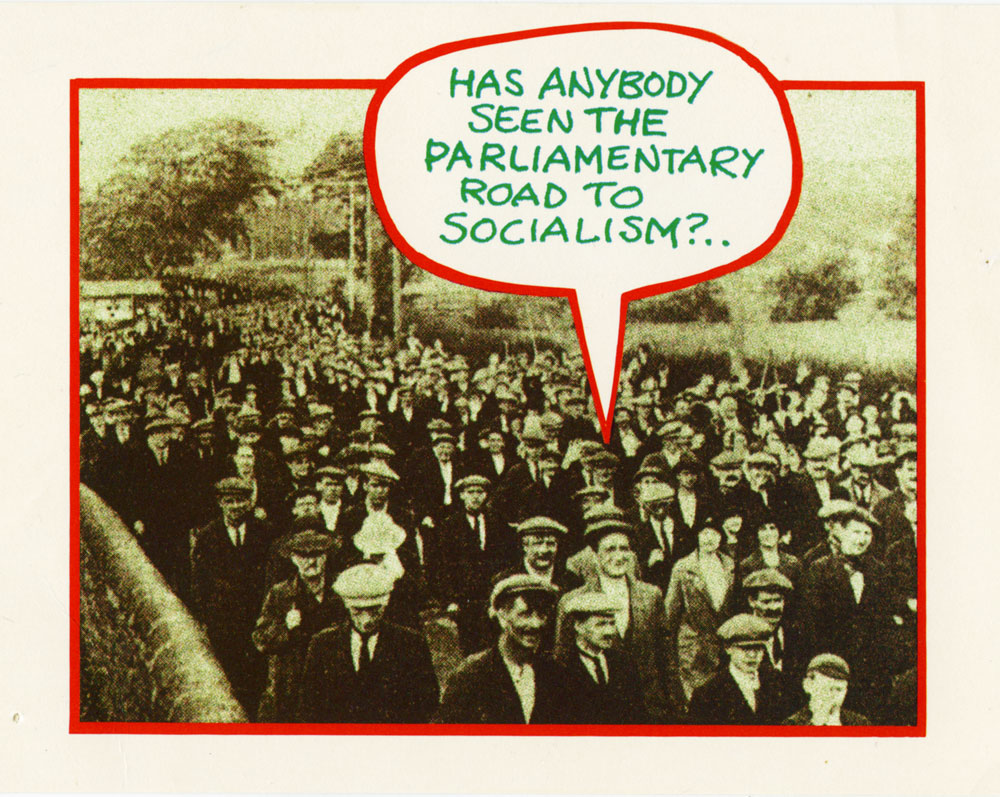 Advanced in the 1970s, under the conditions of class compromise that Swedish social democracy had fashioned with the capitalists, the Meidner Plan was a proposal to upset that balance of forces and massively, if incrementally, extend worker ownership to the point of social and economic dominance. Jacobin recently re-posted a 2017 article, by Mio Tastas Viktorsson and Saoirse Gowan, on ‘Revisiting the Meidner Plan.” It is a deeply enthusiastic expression of support for the Swedish initiative that also makes the case for its contemporary relevance. Dealing as it does with such a clear and detailed social democratic blueprint, the article raises questions of great importance on the social transformation of capitalism by way of measures of reform. I want to address this very issue but it would be useful to first look at the context and main elements of the Meidner Plan.

In the 1970s, the Swedish trade union federation, the Landsorganisationen (LO), with very high levels of unionization and with social democracy firmly placed in government, considered the limitations of the social compromise it had helped to fashion. (Let it be stressed that the employers had agreed to this precisely because Swedish workers had a militant history of fighting for their rights that had to be taken fully into account). A postwar welfare state had been created on the basis of ‘Keynesian fiscal policies, centralized collective bargaining between unions and employers, low inflation, and a push for wage equalization through a “solidarity in wages” policy.’ LO economists Rudolf Meidner and Gösta Rehn had played a key role in developing this approach.

Relatively high levels of social provision, were complemented by a plan to equalize wages. This meant that ‘unproductive firms would not be able to stay afloat by underpaying their workers.’ Capitalists who raked in big profits would pay relatively high wages and ‘low productivity enterprises would be replaced by new jobs in more productive firms and industries through massive investments, active labor market policies, and an extensive welfare state to ensure nobody suffered significant hardship in the intervening period.’

The problem that stared the LO leadership in the face was that the biggest capitalists had been able to work this social compromise to their advantage and ‘a vast proportion of capital in the Swedish economy was controlled by a mere fifteen families.’ As the authors of the article put it, ‘Solidarity in the politics of wages had led to a lack of solidarity in the politics of profits.’Thus, a ‘Meidner Group’ was brought together to look at taking things in directions that those fifteen families would have much less enthusiasm for.

The result ‘was one of the most ambitious democratic socialist policy proposals ever seriously considered in a developed economy.’ The plan would have established ‘wage-earner funds...controlled by workers within entire branches of industry’ that would be ‘financed through profit-related payments from firms in the form of voting shares, and administered through union-dominated boards.’ These ‘funds would gain larger and larger stakes in the company until they became the majority owners.’

The scale of the plan was such that ‘It was estimated by the Meidner group that wage-earner funds would have majority control over the stock market within a few decades.’ As the share of worker ownership increased, it would, of course, become possible to take over the decision making role. In this regard, there was even a proposal to use a portion of the funds to provide ‘education, and training for workers to assist them in the running of their companies.’

Three factors worked against the implementation of the plan. First of all, the employers, rather predictably, had something to say about it and fought back with considerable determination. Secondly, the social democratic political leaders were very quick to appreciate that this was all several bridges too far. The authors tell us that ‘..when Prime Minister Olof Palme saw the first draft of the Meidner Group report, he thought it was an interesting academic discussion rather than a serious proposal.’ I rather suspect he had other less diplomatic ways of describing the plan when he was with his inner circle. Finally, however, the shelf life for the framework of class compromise that the Meidner Plan and the whole Nordic Model rested on was fast running out. The post war boom and the basis for ‘Keynesian fiscal policies’ were at an end and a conservative government was elected in 1976. By the time the SAP (the Swedish Social-Democratic Party) returned to power, in 1983, global capitalism was changing and social democracy was changing with it. The social accord that gave rise to the aspirational Meidner Plan was not going to hold up.

I must fully confess that I approach the Meidner Plan as one who has long been convinced that there will be no parliamentary road to socialism. Even less do I think that it will be created by making the working class the majority shareholder in capitalism. In evaluating the plan and the present article, five key considerations strike me.

Firstly, we should note that capitalism is a global system, with an imperialist division between, oppressed and oppressor countries. If this plan had any prospects of beating the capitalist class at its own game and taking control of its corporate structures so as to transform them, it was developed in the context of a very wealthy European nation, with a capitalist goose capable of laying golden eggs. The most tactful response to the question of how the Meidner Plan could be implemented in sub-Saharan Africa would be an awkward silence.

Secondly, having considered the context of place, we must also deal with the timing of this initiative. As I previously suggested, the post war boom years, were a time of very significantly elevated levels of class compromise. This was true in all of the ‘developed’ countries and Sweden was one of the leaders of the pack in this regard. Even in this relatively favourable setting, the proposal faced decisive corporate opposition and a serious lack of enthusiasm at the commanding heights of a social democracy that was then far to the left of its present political location. The authors seriously hope to reawaken such a plan in the 21st Century and even implement it in the United States. To be frank, the prospects for a gradual takeover of Wall Street by ‘wage-earner funds’ and its appointed representatives are far too dismal to pin any hopes on.

Thirdly, like all plans to capture parliamentary majorities or dominant voting blocks in the corporate boardrooms, the plan seriously underestimated the ruling classes that it proposed to displace. The opposition of the Swedish capitalists to the Meidner Plan was but a tiny glimpse of how their kind will fight any fundamental challenge. There are many far more horrible examples of how capitalist property will be defended when push comes to shove, with the Pinochet coup in Chile as a particularly infamous example that also served as a harbinger for the global project of neoliberalism. Nor will it do to suggest that the patient process of social transformation will have enough working class support that ruling class sabotage would be thwarted by strikes and protests. This is not a job for pressure tactics or inconclusive rounds of struggle since considerably more than limited concessions are at stake. Though people who deal in Meidner Plan approaches are far too polite to say so, this is a question of expropriating a class of exploiters and that task, like it or not, is not a social engineering project but a revolutionary question.

Fourthly, however, even if the Swedish capitalists, weakened by all the compromises they’d brokered, had gone with the plan, I question how transformative it would have been in reality. In place of a dynamic process of independent working class self-organization, building a new consciousness and throwing off ‘the muck of ages,’ we have the slow creation of shareholder majorities and the training of worker reps able to run capitalist enterprises. If any mass action were involved, it would play an entirely subordinate and supportive role. The level of bureaucratic distortion that has occurred within trade unions, as they function within a system of state regulated ‘labour relations’ and legally sanctioned collective agreements, has been bad enough. A bureaucratic hostile takeover bid against corporate power, brokered by trade union officialdom and social democratic office holders, fills me with dread. Candidly, I fear that this road to socialism would be so long, winding and marked by so many pragmatic compromises that it would never reach its destination.

Finally and most importantly, the concluding portion of the article includes a formulation that I found incredibly telling. We are told that something like the Swedish plan could create the ‘concrete changes in our society that ensure capital works for the many, not the few.’ What is proposed here, rather than the abolition of capitalist property and a radical transformation of society, is that the exploitative extraction of surplus value should be subjected to a slow process of egalitarian redemption. To say the least, I question the validity of such a concept but there’s another implication that needs to be drawn out.

In order for capital to ‘work for the many’ it has to be working well in the first place. That is to say that, in order to engage in this reform process, spanning years if not decades, you would need a very stable and healthy form of capitalism in place. The Swedish model was devoted to ensuring an increased share for the working class but it’s whole modus operandi centred around preserving productive companies, driving weaker competitors out of business and relying on the robust profits of a thriving capitalist system.

In my view, this consideration goes a long way towards explaining the reluctance of those who want to reform capitalism to accept the crisis ridden nature of that system. When people insist that Karl Marx was only thinking out loud about the tendency of the rate of profit to fall and that Friedrich Engels made too much of it all as he put the third volume of Capital together, perhaps a deeper political disagreement is at work. When crises within global capitalism are presented as the result of the financial arm of the system having too much power and influence, rather than being caused by fundamental contradictions in the capitalist system of production, the same differences may be expressing themselves. The question of capitalist crises and how deep seated they are is no abstract consideration but one that a great deal hangs on.

This is all of even greater importance in the period we now live in. Crises within capitalism at the level of economic dislocation are severe enough but they are increasingly linked to the system’s complete inability to develop a sustainable relationship with nature itself, with all the devastating consequences that flow from this. We have entered the pandemic era and a time of climate disaster. Call me an outdated traditionalist but it seems to me that this is a situation that calls for the working class to organize dynamically and independently in order to play the role of gravedigger of capitalism, rather than have its bureaucratic appointees gradually shift the balance of power in the corporate boardrooms.

I question whether the Meidner Plan could have prevailed in the context of the Sweden of the 1970s. A comparable initiative, in the present context of a global capitalism beset by a multifaceted and deep crisis, would be an entirely ill fated venture. In my view, to an extent neither of them could have fully understood at the time, Rosa Luxemburg was right and Eduard Bernstein wrong. The elimination of capitalism, more than ever, is a revolutionary question.