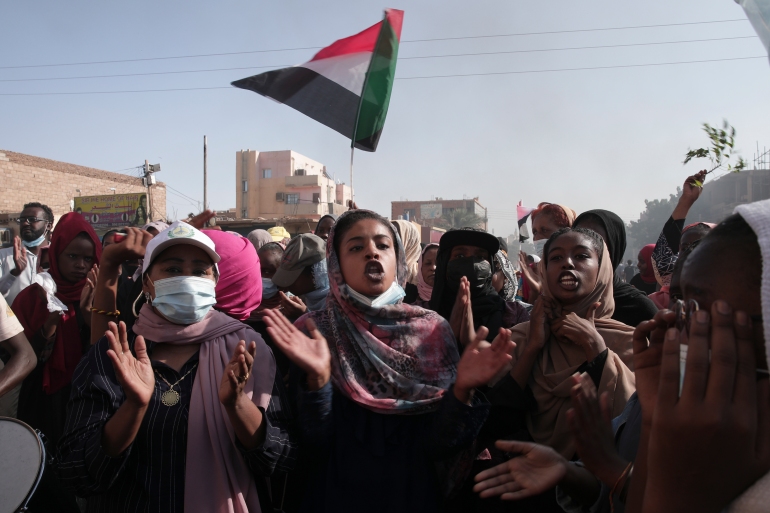 Since the Sudanese military seized power on 25 October, dissolving the transitional regime that had been formed following the overthrow of the government of Omar al-Bashir in 2019, a courageous and determined resistance has taken to the streets. At least nineteen protesters have died at the hands of the army and police, and many more have been injured.

On 13 November, two days after coup leader, General Abdel Fattah al-Burhan, declared himself head of an interim ‘Sovereign Council,’ five people were shot and killed, and one succumbed to ‘suffocation from tear gas’. This round of brutal repression was unleashed against a mobilisation that had been called by the Sudanese Professionals Association, the Resistance Committees, and supported by the Sudan Doctors Committee.

This confrontation was only the latest in an ongoing series of defiant actions against the coup. Mobilisation on the streets has been bolstered by major strike action and, despite state violence and mass arrests, the slogan ‘no negotiation, no partnership, no compromise’ has been taken up by the movement. The strength of this resistance has created a crisis for the military commanders and the outcome of their venture is far from decided.

Since Sudan became independent in 1956, the military has never been far from the centre of political power, either ruling directly, or hovering menacingly over periods of civilian government. This latest move to assert direct control can be seen as a ‘coup of the commander in chief,’ in that the most senior ranks have taken this initiative, rather than a disgruntled element within the armed forces. Al-Burhan’s present power grab can be compared to that of General Ibrahim Abboud who established military rule in 1958, just two years after Sudan’s independence was formally recognised.

The common denominator in both of these armed takeovers is readily apparent. In each case, the military wished to impose conditions under which popular resistance to social inequality and exploitation could be suppressed. At the same time, the army commanders lost patience with the civilian representatives of the ruling establishment, and felt that a more disciplined and brutal approach was needed in order to get the job done.

Before Sudanese independence, tenant farmers in the cotton producing region had marched on the capital of Khartoum and occupied a city square in 1953 to demand recognition of the union they had formed. Two years later, farmers in the White Nile region followed their example and began to organise and, in 1956, cotton workers came out on strike. The newly independent state responded with severe repression, with hundreds being shot down, or left to die in appalling conditions of detention.

The ongoing threat and periodic reality of direct military rule in Sudan is, of course, largely attributable to European colonialism and the more indirect forms of Western domination in the present period. British imperialism, as it took control of Sudan, created a system of ‘divide and rule’ in which ‘wealth, power and high social status were concentrated amongst the Arabs’, while ‘all others were part of a sudani, "a black people"'’.

This terrible legacy generated conditions of devastating armed conflict within the independent state. The first of Sudan’s civil wars raged up until 1972, and the second continued between 1983 and 2005, leading to an independent South Sudan in 2011. In such conditions of decades-long internal strife, the dominant role of Sudan’s military in the political life of the country is not hard to understand.

The coup that was carried out by General Abd al-Rahman Siwar al-Dahab in 1985 granted the military veto power over a proclaimed transitional period. It also focused on undermining popular demands for change that were considerably disturbing to the ruling strata. When the military leaders elbowed Omar al-Bashir aside in 2019, a very similar procedure ensued. It has taken the military chiefs a two-year period to lay the groundwork for their present attempt to take control in the face of huge resistance.

As on previous occasions, the military are the armed agents of those who have a stake in the exploitation of Sudan and its people, be they locally based or the representatives of Western business interests. As he took control, al Burnham was careful to sing the praises of the government he was pushing aside. He noted their work in introducing ‘economic reforms’ that consisted of harsh austerity measures,

‘prescribed by the International Monetary Fund that included the abolition of fuel subsidies, the severe downscaling of subsidies for wheat, electricity, and medicines, the abolition of multiple exchange rates for the US dollar, and the floating of the Sudanese currency.’

The outgoing government had also established closer relations with Washington and the beginnings of co-operation with Israel. This commitment of the civilian rulers to a regressive political agenda caused no concerns whatsoever for the military leaders. They simply felt that, when it came to implementation and enforcement, a period with a firmer hand on the tiller was in order.

It is impossible to observe the incredible bravery, with which the masses of people in Sudan are resisting military rule, without feeling a deep sense of respect and admiration for them. The country’s post-independence history consists of an ongoing struggle on the part of its rulers, military and civilian, to contain social resistance and popular demands. In this regard, naked repression and tactical shifts have both played a part.

Those who are fighting back today face a ruthless and highly experienced enemy, in the form of a military establishment that has considerable experience in dividing and weakening popular movements, and in striking without pity when it is possible to do so. The scale and intensity of the resistance has already forced the rulers to delay and manoeuvre and, the brutality they have unleashed notwithstanding, the present regime is still seeking the means to consolidate its grip.

The movement in Sudan today, like those taking to the streets in countries across the globe, faces major questions about objectives, methods of struggle and forms of organisation. In this context, the depth of the resistance and the degree of self-organisation that have been seen in Sudan are of great importance. From 2019, the exceptional role in the struggle played by women has been a feature of the resistance. “My mother forbade me from participation in demonstration, but my brother supported me, and we go together,” one young woman stated at a major protest. The authorities, greatly alarmed at this development have used the most brutal forms of intimidation, including sexual violence, to try and contain it, but without success.

The role of the resistance committees at the present time and over the last period has been very significant. They were ‘invented during the September 2013 protests against al-Bashir’s austerity measures as cells for mobilisation at neighbourhood level in urban Khartoum’, and they have become ‘successful, open access, horizontally organized units of politicization, mobilization, manoeuvring in Khartoum, as well as in many of Sudan’s smaller towns.’ The committees have ensured that:

‘thousands of young women and men have been drawn into political life as a consequence, mostly free from the shackles of Sudan’s ancien regime of patrician lords, scheming military officers, and campus politicians.’

Though the traditional parties of the ‘Forces of Freedom and Change Coalition’, that played the leading role in the civilian component of the transitional government, have tried to influence and control the resistance committees, their dynamic form, and focus on direct participation makes this very difficult. So great has the impact been of the committees that even General al-Burnham was forced to parade some dubious lackeys as supposed resistance committee representatives, ‘planting them as an obedient audience in a spacious hall in the army headquarters as he proceeded to rant about the prospects of a transition to democracy by military means.’

There are great dangers for the movement and the outcome of the conflict is uncertain. However, the present round in the decades-long effort of Sudan’s rulers to contain popular struggles unfolds under conditions of enormous uncertainty and crisis, within the country and internationally. In such a situation, the example of resistance can be highly infectious and the courageous people on the streets in Sudan are setting a very fine example indeed.