RESISTING THE ATTACK ON TORONTO'S ENCAMPMENTS 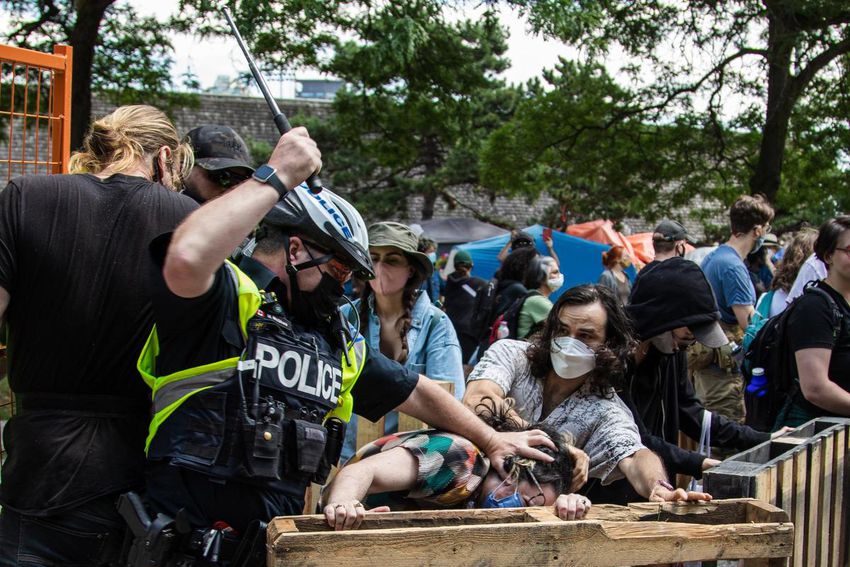 As Toronto City Hall sends in massive squads of police to drive unhoused people from encampments in public parks, the question arises of how best to resist this brutal attack. Based on my own experiences as an anti-poverty organizer, I think there are some strategic considerations that must inform this struggle.

It should be understood that municipal government is the level of state power that most directly serves the interests of the capitalists who invest in property. In recent decades, Toronto City Hall’s main role has been to facilitate the creation of a “neoliberal city” in which an agenda of upscale redevelopment and extreme commodification of housing is pursued relentlessly. This course of action has resulted in massive profits for developers, construction companies, and bankers. It has also provided a lot of luxury housing on prime urban land for those wealthy enough to afford it. At the same time, it has led to gentrification of working-class communities, soaring rents that have caused immense hardship for poor tenants, and an ever-worsening catastrophe of homelessness.

The triumph of this profit-driven agenda has been so complete that it has reduced political differences within Toronto’s City Council to a very narrow range. A dominant grouping on Council that includes Mayor John Tory enthusiastically embraces the redevelopment drive and works to take it as far as possible. A queasy group of ”progressives” finds this agenda sad and regrettable but considers it to be inevitable. These councillors are reduced to begging for small concessions from the developers and financiers, so as to make the process slightly less harmful. For them, “victories” are won if they can ensure some additional park space or a few more housing units within upscale developments that are described as “affordable” but that poor people can’t actually afford to live in. This means these “progressives” will do very little to support community-based resistance – only as much as they feel is necessary to preserve their progressive credentials. In the present context, though they won’t speak unequivocally in defence of encampments, several members of this group on Council have come out against the use of police violence to shut them down.

For the politicians and senior administrators in Tory’s faction, the public outcry over encampment raids is disturbing, but they calculate it will subside. Their overriding goal is to open up a path for investment and development. Homelessness and the human suffering it involves are not a problem for them as long as these things are not too visible. If homeless people can be crowded into hellish shelter facilities or otherwise made to sleep somewhere out of sight, the neoliberal city will function more smoothly.

The only effective means of resistance in this situation is to ensure that the visibility of the homeless disaster is increased, rather than diminished. This is the key to convincing the municipal power structure that their present course causes more problems than it solves. It is vital that on-site resistance to encampment clearings be maintained and intensified. The process of removing people from parks has been more than the mayor and his senior planners bargained for, and resistance to it has the potential to undermine their resolve, forcing them to call off their cops and offer serious housing solutions.

The use of a wide range of tactics is healthy. Keeping the issue alive on social media is very helpful. There is nothing at all wrong with lobbying members of City Council, including making use of official channels to register community concern: deputations before Council standing committees and suchlike. However, such tactics will not be enough to convince the most influential politicians and administrators that the political price tag for their present course is more than they want to pay. To take things to that level, disruptive forms of collective action will be absolutely necessary.

There are places where politicians and the business interests they serve would be even more distressed to encounter “visible homelessness” than in public parks: their condo showrooms, their fancy gatherings, their favourite restaurants, and outside their luxury homes (Mayor Tory is especially sensitive in this regard). All disruptive actions that place unhoused people and their allies where the grandees of redevelopment don’t want them to be can be enormously effective.

City Hall itself must also be a focus for such action. Council and committee meetings can be confronted; visits can be paid to the offices of key politicians. High-profile municipal events can be interrupted. The more disruptive the challenge that is set against them, the more that officials are likely to opt for concessions in place of their present repressive course. The more pressure that is applied, the more the “progressives” on Council will want to distance themselves from the group around the mayor, and press for viable solutions. Tory himself, while he diligently serves the redevelopment agenda, has his own pretensions to “inclusiveness” and “social compassion” that he tries to preserve. Substantial concessions from City Hall are entirely winnable.

The present effort to sweep out encampment residents takes place as municipal politicians develop their goals and priorities for a “post-pandemic” Toronto. That they are ready to serve the needs of wealth and property in so brutal a fashion sounds an ominous note for all of us. This is an attack that urgently needs to be defeated by a broad, united movement of community resistance. The effort to push homeless people from view, along with the entire agenda of profit-driven social abandonment, must be met with a defiance that is loud, glaringly visible, and utterly impossible to ignore.