RESIDENTIAL SCHOOLS AND THE CRISIS OF LEGITIMACY 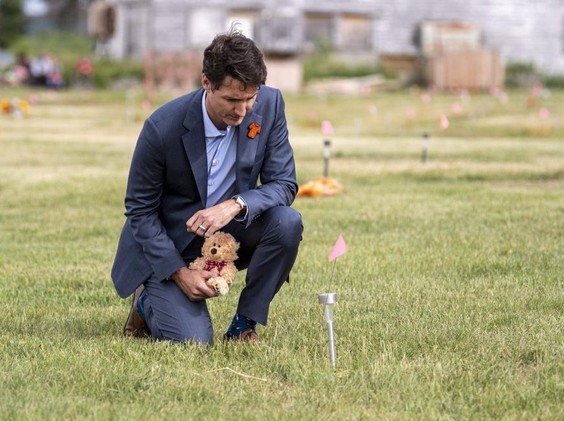 State power ultimately rests on the ability to use force in the interests of the dominant social class. However, even the most authoritarian regimes work to ensure a level of legitimacy and the allegiance of a major portion of the population. For liberal democracies that serve exploitative minorities through ‘representative democracy,’ legitimacy is especially important.

The Canadian state certainly has its ‘bodies of armed men,’ and anyone who has ever dealt with the police on a picket line will know that this physical power is far from neutral when it comes to the class struggle. Still, even the most shameless political lackey of business interests will assert that Canada is a democratic country where the ‘rule of law’ applies and the ‘will of the people’ is supreme. The reality, of course, is that the formal right to vote does not preclude the existence of a ruling class. In a thousand ways, the power of wealth controls the electoral process and the functioning of governments.

Among liberal democracies, Canada is one of those that was established on the basis of settler colonialism. This creates an additional complication when it comes to the preservation of legitimacy. The reality that the Canadian state came into being and has been maintained ever since through the genocidal and deeply racist dispossession of the Indigenous nations, is a discordant note when it comes to claims of ‘democracy’ and ‘freedom.’ The question of how to reconcile the settler colonial ‘logic of elimination’ with noble sounding values of fairness and inclusion is a ticklish matter at the best of times.

These days, crudely racist notions that dispossession was justified on the basis of the inferiority of the Indigenous population are largely (though not entirely) out of favour. Theodore Roosevelt’s assertion that ‘The settler and pioneer have at bottom had justice on their side; this great continent could not have been kept as nothing but a game preserve for squalid savages’ is hardly something that Justin Trudeau would care to repeat. Today, the favoured approach is to accept past wrongs and to acknowledge an unfortunate ‘legacy’ but to claim that a process of ‘reconciliation’ will put everything right. This is also often linked to the claim that, whatever may be wrong with Canadian society, it is altogether kinder and gentler than the one to the south.

This effort to square the circle on the settler colonial reality of Canada is vulnerable on several fronts. Firstly, it is essential but very difficult to conceal the fact that this ‘legacy’ of colonialism is actually its present day manifestation. The logic of elimination is still at work and it is there to be seen in many forms. Critically, it is expressed in the development of ‘resource colonialism.’ At this point in Canada’s history, the export of oil and gas to the Pacific Rim has become a strategic priority for those in economic and political power and the crushing of Indigenous rights is central to this.

The second consideration that threatens the polite fictions is the huge and explosive question of Indigenous resistance. Containing and diverting this threat has always been a priority for Canadian governments. Finally, the lie of a blemished but essentially fair society requires that even past wrongs should be dwelt upon a little and possible with the stark details kept out of the picture.

That the nature of the residential school system should emerge in such horrific terms is unfortunate for those who want to conceal the true enormity of genocidal dispossession. The scale on which Indigenous children died in these hellish institutions is beginning to emerge and tens of thousands of victims are likely to be found. The level of public attention that has been generated makes it inevitable that millions will be shocked by what comes to light.

What has been exposed is an operational plan, coming from the highest levels of government and state administration, to crush several generations of Indigenous children and eradicate the very identity of their people. It is also clear that this was put into effect at an incredible cost in human life. Duncan Campbell Scott, head of the Department of Indian Affairs, wrote in 1910:

“It is readily acknowledged that Indian children lose their natural resistance to illness by habitating so closely in these schools, and that they die at a much higher rate than in their villages. But this alone does not justify a change in the policy of this Department, which is being geared towards the final solution of our Indian Problem."

This is the settler colonial logic of elimination at work in all its cold brutality. Only someone who dismissed the humanity of those children could express himself in these terms and this man was a senior official who was implementing government policy. The Canadian state has been constructed on the graves of members of the Indigenous nations it dispossessed and sought to destroy. The residential schools were only one horrible part of this genocide and this has been brought home to millions of people, in Canada and beyond.

The effort to find the bodies of these children came from Indigenous communities. There has been an outpouring of outrage since and it has taken various forms. Statues expressing the racist triumphalism of the colonial project have been pulled down across the country. The residential schools were run by religious institutions, mostly the Catholic Church, and churches have been set ablaze in various locations. This year’s Canada Day celebrations were cancelled or modified in a number of communities and marches were held to demand justice in the wake of the terrible discoveries.

The Canadian establishment has embarked on a major effort to salvage legitimacy in the face of this crisis. Between the two leading political parties, the wily and adaptive Liberals are better suited to this job and Justin Trudeau has been busy on a range of fronts. He has sought to try and pin as much blame as possible for the residential schools on the Catholic Church. That there is much of it to pin on that institution is quite clear but it certainly suits the government of Canada to have attention focused on the religious agents, while downplaying the role of the state power in directing the operation.

Trudeau steered a careful course when it came to calls for the cancellation of Canada Day. If we see his task as preserving the legitimacy of the Canadian state, he had to appear contrite without acknowledging the fundamental realities of the the colonial project. The annual display of patriotism posed a problem in that regard and Trudeau cleverly avoided cancelling the day while insisting that it must be a ‘moment of reflection.’ A photo-op was obligatory for Justin Trudeau and, perhaps at cost of offending those for whom this was just too crass and cynical, he arranged to be pictured kneeling with a teddy bear at a residential school site.

Queen Elizabeth is still the Canadian head of state and it is not surprising that the Liberals, at such a time as this, would appoint an Indigenous person as the representative of the royal parasite in the UK. Mary Simon, as governor-general, occupies a symbolic position but what does it symbolize? The Crown she represents is object in the name of which colonial dispossession has been undertaken. It is a well calculated play for legitimacy for a settler state to ostentatiously place an Indigenous person in that position. At root, this is not about changing but, rather, preserving the Canadian settler state.

As the terrible record of the residential schools is exposed, will the crisis of legitimacy be overcome? The systems of tactical compromise and co-option will be put to full use but the clamour for change may not be so easily silenced. The reality of what was done to generations of Indigenous children can’t be reconciled with the notion of a fundamentally just society will a few flaws. It is a society that was created on stolen land with terrible violence. It exists today on the basis of exploitation and vast economic inequality and it is infused with deep and pervasive racism. It operates on the world stage as a predator, with its mining companies hated and feared across the globe for the destruction and misery they inflict.

At this time of biomedical, economic and ecological crisis, legitimacy and acquiescence are harder things to preserve for those in power. The residential school crisis is a reminder that, in Canada, the struggles against capitalism and colonialism are inextricably linked.