THE PANDEMIC HITS THE NEOLIBERAL CITY 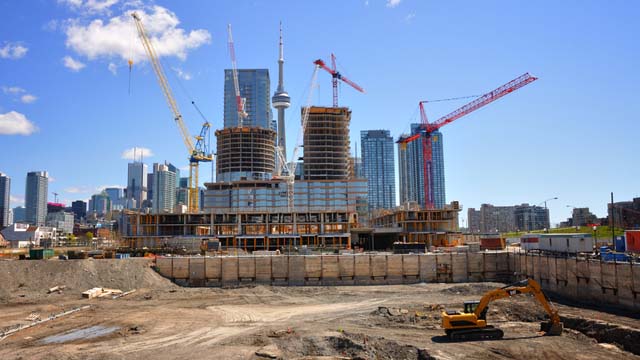 Some years ago, when I worked as an organizer with the Ontario Coalition Against Poverty (OCAP), we were contacted by people from Indigenous communities along the north shore of Lake Huron. They were bringing a mass contingent to the Ontario Legislature to demand that a particular social cutback be reversed and we rallied to march in solidarity with them.

The pace and scale of urban redevelopment in Toronto was shocking to a lot of those who had travelled down to Toronto. As we marched towards the Legislature, the looming condo towers, many still under construction, caught the attention of a man just in front of me. He turned to those around him and said, “I knew they had stolen our land but now they’ve stolen our sky as well.”

This visitor to Toronto was, of course, absolutely correct about the brutal theft of Indigenous land that laid the basis for the present Canadian state but, as he and his friends gazed in shock at the greedy frenzy of urban redevelopment, he also alluded to a second act of theft. This is the socially destructive and massively harmful commodification housing that is one of the defining features of the neoliberal city. Moreover, this second act of criminality and the foundational act of colonial dispossession that he referred to have compounded each other. In 2018, ‘Indigenous people made up less than 2.5 per cent of Toronto’s population, but 16 per cent of all people who are experiencing homelessness and 38 per cent of those outdoors on the streets were Indigenous.’

The neoliberal decades that have unfolded since the 1970s have played out with a devastating impact in the urban context. Apart from upscale redevelopment, with all the hardship, inequality and destitution it has brought with it, we have also seen the effects of austerity driven social cutbacks, the enormous growth of a low wage precarious workforce and a massive expansion and intensification of the social control function of policing. All of this, moreover, has been imposed in line with the deeply ingrained racism that shapes this society so fundamentally.

It has been said that a virus doesn’t discriminate along the lines of social class or race. This may be true in the sense that a virus is indifferent to the social standing of the person whose respiratory tract it enters. However, the coronavirus has most certainly followed the lines laid down for it by neoliberal capitalism. Before it even began to spread, the pandemic was the product of that very system. It emerged out of industrialized farming techniques and the destruction of habitat. Once it was ready to begin its journey, it followed a path laid of for it by systems of commerce and the global supply chain. As it reached the neoliberal city, its routes of infection were mapped out clearly along well marked pathways of social and economic inequality.

As the virus began to find its way into the population, its crimes of opportunity had been set up for it by corporate greed and the pursuit of profits. Racialized and low wage workers were ‘overrepresented in workplaces deemed essential from the outset of the pandemic where physical distancing is also difficult.’ The interwoven factors of class based exploitation and racial oppression led to horribly predictable results. By last summer, it had been ascertained that ‘Black people and other people of colour make up 83 per cent of reported COVID-19 cases while only making up half of Toronto's population.’ This utterly appalling result, however, reflects the vulnerability of those people who live in the neoliberal city’s racialized working class neighbourhoods. In these, a dreadful combination of unsafe working conditions, overcrowded housing, high rates of compromised health and forced reliance on crowded public transit were a veritable gift to a virus spreading through an urban population. It is instructive to compare the situation of people in Toronto neighbourhoods like Jane Finch with those who live in the three east London boroughs that have become known as the ‘COVID Triangle.’ A grimly fascinating investigation of the impact of the pandemic on this area appeared in the Financial Times.

With the pandemic still raging and a lethal third wave taking hold, a process of mass evictions is unfolding, with tenants who have been denied adequate income during this crisis facing a pitiless state run ‘adjudication’ system that drives them from their homes. At the same time, those who have already been rendered homeless are placed in harm’s way as the dangerous ‘variants of concern’ begin to dominate the spread of infection.

The devastating impact of the pandemic on a city already pummelled by decades of neoliberal attack is shrugged off by politicians and tame media outlets as a rough patch that will be overcome as soon as the virus is no longer with us. In Toronto and beyond, there are good reasons to question this official discourse. The measures of economic stimulation taken by the Biden administration particularly have raised hopes of a different approach in the post pandemic period. However, ‘life support’ measures adopted in the midst of a massive health crisis and vast economic slump can’t be assumed to represent a change of course over the longer term.

The pandemic greatly intensified a crisis that has been simmering since the crisis of 2008, with low rates of profit and productive investment dominating the economic picture. Biden’s measures will not come close to solving these problems, to which will be added the ‘economic scarring’ left by the pandemic. Rather tellingly in the Canadian context, Trudeau has instructed his finance minister to ensure that stimulatory fiscal measures taken in the present emergency don’t have any long term budgetary implicactions. Rather than offering social peace, the next few years are likely be a time in which the question of who will pay for the crisis is hotly contested and decided by way of the class struggle.

As the virus spreads through our workplaces and communities, we see many of the features of the struggles that will mark the period after the pandemic has receded. Over the last while, racist policing has been one of the most explosive issues that has brought people out onto the streets. This came out of the US, in response to the killing of George Floyd, but it spread to other countries, including Canada. The police, with their swollen budgets that suck up the resources needed for public services and to meet real community needs, are the armed enforcers of all the injustices and oppressions that mark the neoliberal city. Resistance to them and demands to reallocate the vast expenditures that are put into maintaining this repressive institution, will remain a major part of the struggles that lie ahead. Interestingly, in the UK, it has been an effort to strengthen the powers of the police and to limit the right to protest that has sparked another major round of struggles on the streets.

Workers deemed essential during the pandemic, disproportionately in low low wage, precarious jobs, have faced brutal and dangerous conditions. Over the next few years, whether the ‘sugar rush’ impact of short term stimulatory spending results in major employment gains or the deeper economic problems undermine this upturn very quickly, we may expect capitalists to try to boost profits through even greater levels of exploitation. Unions will be of huge importance but there will be a need for much more dynamic, democratic and rank and file driven forms of organizing and fighting back if they are to play the role they can and must in this period. This will be true both in terms of workplace resistance and in participating meaningfully in struggles in the communities that workers are part of.

At present, some very important struggles among Toronto tenants facing the threat of eviction are being taken up. Hundreds of people recently rallied outside the luxury condo tower that Mayor John Tory lives in to challenge City Hall’s efforts to prevent a local carpenter from building small shelters for homeless people. There will be a need for such vital defensive fights to be built upon. The struggle against evictions will have to generate the support needed to win the cancellation of rental arrears for huge numbers of tenants in crisis. Where people are denied the right to housing, a movement large enough occupy and hold empty homes will have to be developed. Above all else, governments at every level must be powerfully confronted to win the only viable alternative to the hardships and injustices of the agenda of developers and speculators, the creation of social housing on a massive scale.

During the pandemic, we have seen protests on the question of climate change take to the streets in Toronto. This should remind us that the ecological crisis and its impacts are an ever more pressing question for movements of social resistance. We will not only have to advance general demands on this issue but must deal with the growing impacts of climate induced extreme weather on urban populations, especially the poor and homeless. The deadly impact of the recent storm in Texas shows how vulnerable the neoliberal city is to the impacts of the climate crisis and communities will have to fight for the levels of public services and social provision that such dire events require.

The spread of COVID-19 has exposed the terrible inadequacies of the healthcare system and the fight to reverse the impacts of neoliberal austerity on this front will be in the interests of all communities under attack. The horrible suffering and death inflicted on the residents of long term care facilities in Toronto and throughout Canada has been appalling. It points to the need to drive the profiteers out and fight for the public resources necessary to deliver such services at levels that meet the needs of people and this will only be won through strong and united action.

These are the kinds of struggles that we can expect to see in the wake of the pandemic’s passage through the neoliberal city. They will have to be built in the face of a determined effort to make working class people pay for the crisis. We will face a regressive agenda from those in power and harsh conditions that will further fuel the growth of the racist right. We will need to develop the plans of action and the organizational forms that will make major victories possible. The movement that emerges will have to militant, determined and both anti-racist and anti-capitalist. It will need to base itself on the perspective that, far from accepting a return to the pre-pandemic neoliberal city, we are fighting for a fundamentally different alternative.