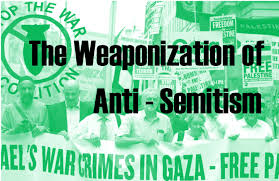 The misuse of the allegation of antisemitism in order to stifle Palestine solidarity simultaneously represents an accusation that the left has its own racism problem. So vile a creature as Donald Trump hurls this charge at those who are in any way critical of Israel, even as he wallows in the most odious stereotypes with regard to Jewish people. It is, of course, absurd to direct such an accusation at those who oppose a manifestation of settler colonialism and I want to respond to this suggestion from the right that left wing political positions are some sort of breeding ground for racist and, specifically, antisemitic ideas.

I should begin by making it clear that I am not asserting that the embrace of left politics creates any immunity from racist or other bigoted ideas. People on the left fail in this regard quite commonly and, given the pressures of the society that we live in, it’s fair to say that none of us are perfect and we all, to one degree or another, express the oppressive concepts and values that a system based on exploitation generates. The ‘manarchist’ and the ‘brocialist’ have entered into the language, the white left activist who is dismissive of racial oppression is no myth and, when it comes to the prejudice of antisemitism, it can and does creep into the political formulations of leftists.

Not to shy away from this issue, it is far too common to see left analysis of the state of Israel, fall into the trap of the Jewish conspiracy, with the notion that the ‘tail wags the dog’ and that the garrison state of Western interests in the Middle East somehow manipulates and controls US imperialism and its key allies. The hateful concept of collective Jewish guilt for the crimes of the Zionist state is another depressing echo of antisemitic thinking. I once put up a social media post about a group of US rabbis who had travelled to the Mexican border, in order to support Central American refugees. Several left commentators wanted to know if they would do the same for Palestinians. The clear implication was that, as Jews, these people had to atone for Israeli Apartheid through a clear minded anti-Zionism not demanded of others.

While it is true, however, that antisemitic thinking can certainly appear on the left, there is an important distinction to be made. I would strongly argue that antisemitism is, overwhelmingly, to be found on the political right. Certainly, it was the far right that infamously marched through the streets of Charlottesville chanting ‘Jews will not replace us.’ Without doubt, antisemitism has taken violent and murderous form in the actions of fascists and white supremacists. However, I mean something more fundamental by this. The right is devoted to the preservation of class based exploitation and social inequality. It rests on systems of colonialism and domination on a global scale. It is the ideology of the oppressors and, while it comes in different forms and can even disclaim overtly racist ideas, it is a political perspective that lends itself at every turn to concepts of racial hierarchy and the active effort to impose them. Antisemitism itself emerged, as a form of racism as opposed to a religious prejudice, after the growth of colonialism created the basis and need for the idea that humanity was divided into distinct races of differing qualities and abilities.

The matter is altogether different when it comes to left politics. If something as vile as antisemitism becomes part of left wing thinking, it does so as a hostile perspective, at odds with the fundamental assumptions on which left analysis is based. Those assumptions embrace human equality and solidarity and lead towards a struggle against oppression and exploitation. This includes a direct challenge to the racism that inspires and justifies colonial projects. This certainly explains why the left finds itself at odds with Zionist ideology and its application on the stolen land of the Palestinian people but the liberatory principles of the left, far from being a source of antisemitism, offer the strongest motivation to oppose it as part of the fight against all forms of racism.

The use of the allegation of antisemitism that has been taken up by supporters of Israel is, of course, primarily intended to isolate and weaken the Palestinian people and their anti-colonial struggle. Especially now that the IHRA definition of antisemitism has been brought into play, the allegation also threatens freedom of expression and academic freedom. For the left, however, it represents a very particular and enormously serious threat to its legitimacy. This can be seen clearly when discredited right wing politicians, long implicated in fuelling the flames of xenophobia and racism, suddenly become accusers of the anti-racist pro-Palestinian left and level the charge of antisemitism. The left has a long and proud history of resisting the colonial dispossession of Indigenous people, challenging racism within capitalist societies and fighting against racist immigration systems. Now, by way of a cynical manufactured slur, it is suggested that the left has no claim to any moral high ground and a distorted mirror image of principled support for the struggle for a free Palestine is held up against it.

This is why weakness, vacillation and retreat by too many on the left has not only represented a shameful abandonment of the Palestinian cause but a betrayal of left principles that should be fundamental and non-negotiable. When people on the left of the British Labour Party have offered absurd apologies and tried to appease their accusers by surrendering ground they should have defended at all costs, they have emboldened Israel’s enablers internationally.

Far from being intimidated by the false accusation of antisemitism, the left needs to go out and meet it defiantly. The sight of life long anti-racists offering apologies to champions of an apartheid regime is too sad and painful to endure. Why is it so hard to stand by some key principles and reaffirm the commitment to challenging all forms of racism, including antisemitism, while making clear that solidarity with the Palestinian liberation struggle is a fundamental part of this? As besieged Gaza suffers, as occupation forces bring their terror to West Bank villages, as another generation of dispossessed people grow up in refugee camps and, as the Zionist leadership, armed to the teeth by the US and its allies, works to complete its inhuman colonial project, what have we to offer apologies for? It’s time to show a fraction of the determination and courage that Palestinians display every day. Whether they try to deny us a platform, drive us from the positions we hold or drag us into court, we must accuse our accusers and reject their slanders with contempt.