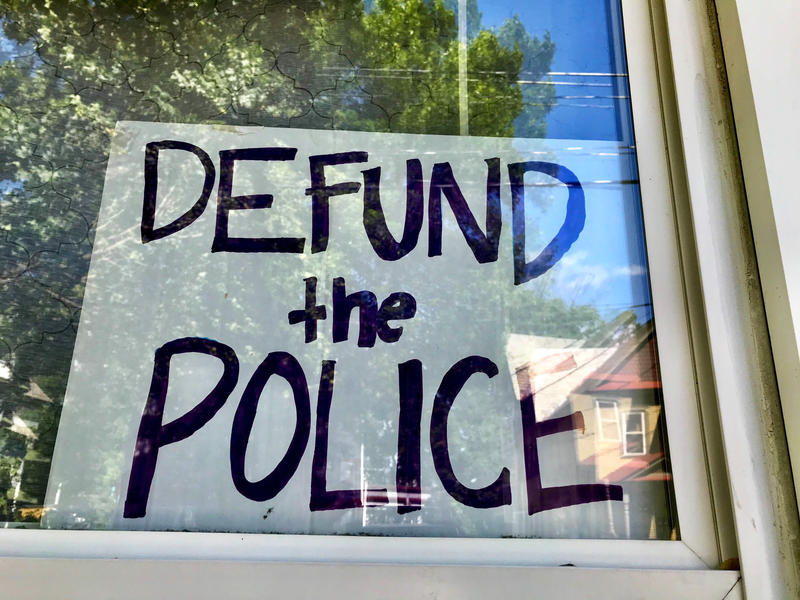 The racist police murder of George Floyd in Minneapolis has unleashed a Black led uprising in the US and inspired a wave of actions internationally and the demand to Defund the Police has become a central part of this. I’ve followed and engaged in quite a lot of discussions among people on the anti-capitalist left about the significance and possibilities of this demand. There are supporters, detractors and sceptics on various grounds and I want here to offer some thoughts on a few key issues that arise. To make clear at the outset, my own view is that this demand, while the inevitable agents of liberal accommodation seek to divert it into safer channels, can be taken forward in ways that point to anti-capitalist conclusions and objectives.

There are two closely related objections from the left to Defund the Police that I have heard most frequently. One is that racist cops are only a reflection of racist society so it is a mistake to focus on them. The second objection is that you simply can’t have capitalism without a repressive apparatus and the notion of abolishing the police under this social and economic system is disorientated. There is some truth in both of these assertions but I still feel that they miss the point. Police are, indeed, enforcers for an oppressive society and it would be correct to suggest that the fight against them must be part of a much broader struggle. However, the same could be said about almost any campaign that has ever been waged. Most of the fights we take up are about a particular feature of life under capitalism. It’s not as if the brutal and repressive role of the police or the vast public resources their paramilitary institutions devour are trivial side issues for poor, racialized working class communities. The massive and pervasive threat of the police is a horrible aspect of the lives of tens of millions of people and their lethal violence has sparked a magnificent and historic uprising. The present focus on this vital question is as justified as it is important and the movement that has risen up may well prove the basis for struggles that challenge other elements of this racist and oppressive society.

Then there is the contention that police abolition under capitalism isn’t possible. It must be understood that the call to Defund the Police is not a hasty improvisation. The notion of ending the repressive role of the police is part of a wider abolitionist agenda and it stresses diverting resources into services and initiatives that would very concretely meet the needs of communities. This rather suggests an ongoing struggle, with partial victories along the way, but one that seeks the eventual elimination of police institutions. I accept that the capitalist state is fundamentally an instrument of repression but coming to terms with this can be the basis for linking abolitionist initiatives to a goal of social transformation. I agree with an argument advanced by Vanessa Wills, as part of an article she wrote on ‘‘Black Lives Matter’ as Identity Politics and Class Struggle.’

“While the “Black Lives Matter” slogan has gained wide acceptance, we find today similar skepticism and hand-wringing about the movement’s calls to abolish or defund the police. Critics argue that such demands would obviously require a complete, fundamental overhaul and restructuring of our entire society, and that these demands cannot be achieved while leaving any part of existing society just as it is. But this is precisely the point. Marx wrote that revolutionary activity was necessary not only because it was the only way to put political power into the hands of the people, but also because it is the only way for us to leave behind the worst of what capitalism has made of us, and to forge ourselves anew—better, less egoistic, seeing that our individual flourishing is organically connected to the flourishing of all. When it comes to the oppressed, particular demands and struggles for liberation are ultimately only winnable when linked together into a common fight for universal social transformation.”

At this time, the political establishments of various countries know they face a very serious challenge to the brutal role the police discharge and to the vast public resources this repressive apparatus consumes. So wily an operator as Toronto Mayor John Tory, facing local Defund the Police initiatives, is scrambling to fashion a credible response that concedes as little, while accepting that some gestures of ‘police reform’ are going to have to be made. Tory’s cynical antics are part of a much wider effort to divert and contain the movement at minimum cost but the demand now advanced by Black Lives Matter in Toronto for a 50% reduction in the police budget suggests he faces some challenges in this regard. In Canada, moreover, the establishment knows an accusatory finger is pointed firmly its colonial police force, the RCMP, as the brutality this body continues to unleash on Indigenous communities comes under well deserved attack.

A bold approach, that rejects the very notion of ‘police reform’ in favour of an abolitionist objective, is capable of advancing further and winning more that one based on more limited goals. Every penny that is cut from swollen police budgets and used to meet community needs is important. Every form of intervention the police presently undertake that they can be excluded from, such as responding to situations of emotional crisis, will save lives and make communities safer. The more uncompromising the struggle, the more that can be won in the immediate term and the more the question of police abolition can be linked to a perspective of anti-capitalism. At a rally held as part of the US West Coast port shutdown that the ILWU called to mark Juneteenth, Gerald Smith, a community organizer in Oakland and former a Black Panther, said something that shows it is perfectly possible to participate in the struggle to Defund the Police while remaining absolutely clear on the anti-capitalist politics that must be included for the demand to live up to its potential.

The present upsurge that has emerged in response to the lethal police assault on Black Lives, unfolds in the context of the pandemic and a rapidly developing global economic slump. We may be sure that the intense hardship caused by the lockdown, with the US not even proving the meagre levels of emergency benefits that have been made available in Canada, was a powerful additional factor in bringing people out onto the streets in recent weeks. Ahead of us lies a brutal period of huge unemployment, mass housing evictions, attacks on workers’ rights and cuts to public services that can produce explosions of anger and powerful social mobilizations. In the US, it has been suggested that the impending evictions of tenants of a vast scale, will be as clearly linked to the question of racial justice as is police brutality and things will not be very different in Canada.

Challenging police violence and racism with a call to actually abolish police forces speaks to the kind of struggles and demands that must be taken up on other questions at this time of unprecedented crisis. The post lockdown attacks on workers and communities will require a massive fighting response that goes beyond the perspective of the defensive struggle. The last thing I want to suggest is that we conjure up a set of demands for a movement that is still only emerging and for struggles that are yet to unfold. However, I will illustrate my point with some tentative ideas. Take firstly the issue of housing evictions. It will be absolutely essential to build in local communities the capacity to resist the removal of people from their homes, as soon as the temporary suspension of the machinery of eviction is put back into gear and landlords go before the state bodies that sanction the removal process to start putting people on the streets. That fight, however, will have to be linked to clear demands that challenge the rights of property owners. Rental arrears that were incurred during the lockdown must be cancelled, rental increases have to be prevented and a moratorium on the eviction process is essential. The extreme commodification of housing in the neoliberal city must be reversed, with a ban on the building of luxury housing and the creation of social housing on a scale that meets the needs. Speculators who buy up housing and leave it empty for their own parasitic advantage must have those properties taken from them so that homeless people can enjoy the right to housing.

In a whole range of areas, workers and working class communities must demand that which meets their needs, regardless of the claimed ability of capitalists and governments to afford them. That the full attainment of such things comes up against the limitations of a system in crisis only advances the mass realization that the resolution of the crisis lies in social transformation. As I said, it is preposterously premature to come up with a package of demands for the period ahead but, when it comes to the general approach, the question of to what extent an ‘impossible’ demand can be won brings to mind an observation from the Transitional Programme.

“If capitalism is incapable of satisfying the demands inevitably arising from the calamities generated by itself, then let it perish. “Realizability” or “unrealizability” is in the given instance a question of the relationship of forces, which can only be decided by the struggle.”

In the end, the violence of police officers only reflects the much greater violence of the capitalist system they serve and protect. At a time when a combined set of biomedical, economic and ecological crises reveal the absolute impossibility of surviving under the capitalist system, there is nothing at all wrong with demanding the impossible of that system. If the abolition of the police is not possible under a capitalist system, it is just as true that it has become impossible for poor and racialized communities to endure the brutal racism of the police. The resolution of that contradiction lies in the struggle for police abolition and much else besides and in the revolutionary conclusions that the logic of that struggle ultimately point to.