THE POOR PAY FOR WAR 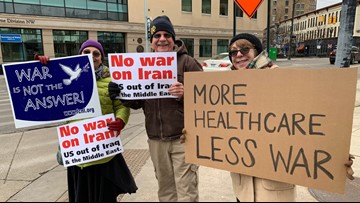 One of the key features of the neoliberal era has been a transfer of resources away from social provision and into bolstering the state’s capacity for repression and violence. Domestically, the funding of police and prisons has been increased, in order to deal with the social dislocation and unrest generated by an agenda of austerity. In Toronto, the bloated police budget will grow by another 3.9% this year, even as the city struggles to deal with brutal social spending cuts imposed by the Ontario government.

Billy clubs and jail cells for use on the home front, however, aren’t the half of it. The strategy of endless war and domination being pursued by the US led western powers involves a massive diversion of resources away from the public services communities depend on, in order to finance a machine of global mass murder. Estimated US military spending, over a twelve month period ending in October, is $989 billion. This kind of obscene spending on the capacity to rain death and destruction down on countries targeted by the US and its allies, brings in vast profits for arms dealers. At the same time, huge social cutbacks are being enacted, including severe reductions in the funding of Medicaid and social security.

In Canada, under the false progressive cloak it likes to wear, the Trudeau government is engaged in the same process. In 2017, the Liberals committed to a 70% increase in military spending over the coming decade, with a policy they titled ‘Strong, Secure, Engaged.’ Defence Minister, Harjit Sajjan, vigorously challenged right wing media efforts to call into question his commitment to global violence and insisted that ‘We are just getting started’

Of course, this ‘hard power’ military capability, as the former Foreign Affairs Minister Chrystia Freeland refers to it, becomes possible only if priorities are set in such a way that arms spending outweighs a range of urgent social needs. The list of those neglected needs is long and lamentable. An enhanced ability to wage war is developed by a government that goes to court to try and avoid having to meet the needs of Indigenous children. Despite an official story of robust economic times, food bank use continues to increase across the country. From coast to coast, a supposed National Housing Strategy notwithstanding, Canada is in the grips of an affordable housing crisis. In Toronto, the largest city in the country, the crisis of homelessness has reached such proportions that the shelters are full and it is necessary to call a press conference in order to pressure City Hall into abandoning plans to dismantle a camp established by destitute people trying to find the means to survive.

Clearly, the drive to war is intensifying and the vast appetite of the war machine will require an ever greater transfer of resources to meet its needs. The US, as leader of a pack of lesser western imperialist countries, including Canada, has moved on from the war on terror and has embraced instead the concept of big power rivalry, with Russia and China, obviously, as its main rivals. The sheer belligerent arrogance of US leaders and opinion makers is quite remarkable in this context. The Wall Street Journal has suggested that an ability of Russian air defences to protect the country from US attack is an outrageous and totally unfair threat to ‘the reach of the US military’ that simply can’t be tolerated.

Iran is a lesser power but one that is especially hated by the US. Its interventions in surrounding countries, as well as a desire to restore the level of exploitative control the US enjoyed before the overthrow of the Shah, have made Iran one of the key targets of Washington’s warmongers. Recent events have seen the White House move to the very brink of horrific military confrontation with the assassination of the Iranian general, Qasem Soleimani. Each development in the unfolding situation produces a new and unbelievable example of the sheer gangsterism of the Trump Administration, with threats to conduct strikes on Iranian cultural sites and to impose deadly sanctions on Iraq when its parliament decided that US troops would no longer be welcome after the killing Soleimani on Iraqi soil.

The recklessness and brutality of the Trump gang, in the effort to dominate Iran, are a clear indication of the dangerous period we are in. The threat of war is present on a global scale and we must understand that the Trudeau Liberals are very much a junior partner in this bloody project. Its public statements on the murder of Soleimani make it very clear that, despite obligatory appeals for ‘restraint,’ the Canadian government entirely supports the lawless acts and predatory objectives of the Trump Administration.

The growing and very deadly drive to war is, at one and the same time, a means by which the war on the poor domestically will be escalated and intensified. With any doubt whatsoever, we have an internationalist duty to oppose the warmongering of the western powers and it is one that we must take very seriously. However, solidarity is also very much a matter of common interests. Poor, homeless and, indeed, all working class people in Canada have nothing in common with the arms profiteers and political leaders who pursue the vile agenda of endless war, while they have every reason to support the people in Iran who face Trump’s military murder machine. At the same time, the fact that public services, healthcare, housing and social programmes will be gutted in order to pay the bill for increased military spending, provides a powerful additional reason to take to the streets. The anti-poverty movement must also be anti-war at this vital time.

We need to do more than put this forward as a general observation, however. We can and must be very specific in our demands and struggles. If we call for the creation of a definite quantity of social housing, to deal with the homeless crisis, we can easily determine how many of the death machines that are being deployed overseas would finance that housing. If healthcare spending needs to increase by a certain percentage, the reallocation of the military budget must be our demand. If we need public resources to be redirected to deal with the impacts of climate change, which so disproportionately affect the poor, the climate wrecking war machine must be dismantled to meet these costs. Our position must be that we oppose war because we reject the criminal aims of those behind it but also because we demand instead a society where enough housing is built, waiting lists for medical treatment are eliminated, public services are greatly expanded to meet the needs of communities and not one penny is allocated to war and the merchants of death.