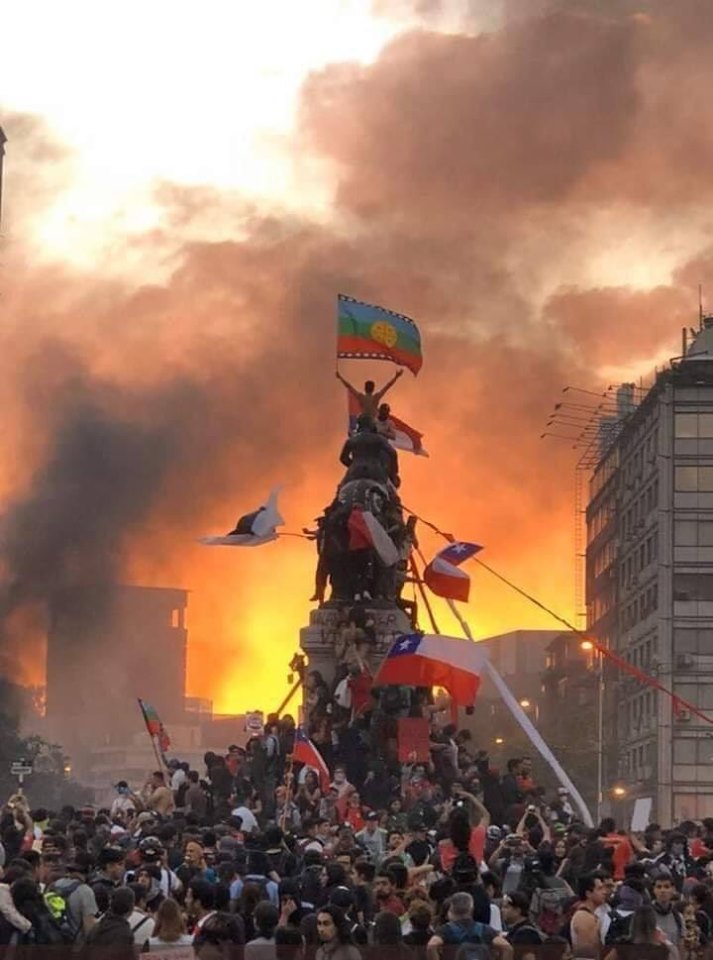 Millions of people have taken to the streets in the recent period in what must be described as a global uprising against the neoliberal order. Contrary to Margaret Thatcher’s infamous proposition that ‘there is no alternative,’ they are making it abundantly clear that they will no longer tolerate the conditions of exploitation and misery imposed on their lives.

Social upsurges can’t be made to order and they don’t unfold according to any script. However, it is certainly true that the volatile anger and deep sense of grievance that the neoliberal assault has created globally is present here in Canada. Wage growth has flattened over a period of decades. The numbers of people forced into low wage, precarious work have exploded. The cost of housing has shot up and this has been a leading factor in creating an impossible burden of household debt.

For the poorest people, the impact of the agenda of neoliberal austerity has been utterly devastating. There has been a vast increase in food bank use. Homelessness has assumed proportions no one would have predicted in communities all across the country. The prevailing political agenda, adopted by governments at every level, is entirely in line with the neoliberal course charted by the institutions of global capitalism. The supposedly progressive Trudeau Liberals, having managed to hold onto power in the last election, immediately inform us that their priorities will include tax breaks for the rich and the completion of environmentally disastrous pipelines. A series of overtly right wing provincial governments are proceeding with the same agenda with even more gusto. These include, of course, the Doug Ford Tories here in Ontario.

If we focus on Ontario specifically, we might consider ourselves in a state of potential social uprising. There are unionized workers on collision course with the Ford government and there have been some important initial skirmishes like the walkout of tens of thousands of high school students in April. Moreover, the government is desperately unpopular and Ford himself is particularly hated. At present, the Ontario Tories are operating their austerity regime in the context of the post 2008 low wage recovery. However, it is clear that conditions of global downturn are developing and this will have a major impact. In such a situation, with unemployment levels seriously increased, an Ontario government devoted to gutting social provision will find itself confronted with huge numbers of people demanding such support. This might well be the factor that turns seething social indignation into mass action.

Uprisings of the kind we are seeing across the world certainly involve the participation of masses of people who had previously been politically dormant. At the same time, however, there are always those who played a role in the last upsurge or who have carried on the patient (sometimes clandestine) work of preparing for the next one. Based on some of the vital international examples that are unfolding at present, it is worth considering some lessons on fanning the flames of discontent and responding when they suddenly start to spread.

The world that neoliberal capitalism has fashioned in its own image has thrown hundreds of millions of lives into chaos and has created, even in the historically privileged countries, a seething mass of ill defined anger. Ever more frequently, the grandees of global capitalism and its key institutions give voice to their deep unease about this very phenomenon. In such conditions of regressive and rapid change, it is perhaps not surprising that huge social upsurges of resistance can be sparked by the unexpected. I’m sure whoever suggested the Hong Kong Extradition Bill is keeping a low profile at the moment. In Lebanon, somebody thought a WhatsApp tax would take effect without much fuss. With the IMF wanting their imperial tribute, the Ecuadorian rulers thought they could get away with the removal of fuel subsidies. A metro fare increase in Santiago didn’t seem likely to cause a rebellion against decades of neoliberalism across Chile. However, those who took this measures did provoke such a response and discovered that “It’s not about 30 pesos, it’s about 30 years.”

I’ve seen several situations where long suffering people react to a final straw no one thought would push them over the edge. In the 1980s the Ontario government granted a winter clothing allowance to children whose families lived on what was popularly known as ‘mothers’ allowance’ while denying it to those on ‘general welfare assistance.’ It seemed a relatively minor matter but the organization I was part of suddenly found the problem of convincing people to mobilize had been transformed into scrambling to deal with all those who wanted to be part of our hastily organized campaign on the issue. The government prudently capitulated in short order. Rapidly identifying the fact that the spark has been lit, fanning the flames of discontent and trying to generalize it are key considerations in such situations.

Recent popular upsurges have faced incredible levels of state repression. The Sisi regime in Egypt has even been able to, temporarily at least, suppress an upsurge with mass arrests and police terror. The struggles in Sudan and, more recently, in Iraq have withstood horrific state violence. The Hong Kong movement has faced hugely escalated levels of police harassment and attack, complemented by the use of criminal gangs against protesters. Nor have the authorities held back from taking repression to new levels in ‘democratic’ Europe. The great liberal hope of the neoliberal centre, Emmanuel Macron, has unleashed shocking displays of police force at the Yellow Vest protesters over weeks and months. In Catalonia, with the complicity of the EU, the Spanish state has used its cops and prisons unsparingly in an effort to suppress the democratic right to self-determination. The initial moves by the Trudeau government, as it faces resistance to its pipelines, are a reason to conclude that the iron fist is at the ready in Canada. In the present round of struggles, escalating mass action has been the most effective means of overcoming state violence.

Repression and concession are often used together by regimes clinging to power in the face of popular unrest. I’ve already given several examples of unwise regressive moves that have sparked resistance on a huge scale. In the present round of global protests, the belated withdrawal of these measures has often been too little too late. However, mass movements are of limited duration and have their peaks and troughs. In sudden upsurges that involve diverse elements and lots of people recently awakened to political life, a strong and united left that can challenge attempts to demobilize movements, in return for useless dialogue or empty gestures, is at a premium.

The contradictions and limitations of movements that are springing up have alarmed some leftists. It is fair to say that left parties and movements are not at an historical peak and the capacity to influence social upsurges is not as robust as we might wish. Moreover, official trade union bodies and social democratic parties are likely to retreat or vacillate in the face of such situations. This means people on the streets without rounded manifestos or clear demands and even the presence of overtly reactionary elements seeking influence and control. We must be ready to engage with, participate in and contribute to movements that reflect a messy reality shaped by the neoliberal decades. Lenin pointed out that social upsurges are ‘an outburst of mass struggle on the part of all and sundry oppressed and discontented elements’ and that the participation of such varied sections of the population means they will ‘bring into the movement their prejudices, their reactionary fantasies, their weaknesses and errors.’ The context we operate in makes that even more true today and dismissive comments from the sidelines are of no use.

The term ‘leaderless movement’ has emerged in Hong Kong and elsewhere. The last thing I want to propose is the self appointed vanguard that is incapable of teaching any lessons because it is incapable of learning anything. That doesn’t mean, however, that those who advance anti-capitalist politics should hide in the shadows. Respectful and clear minded proposals on how to bring in new allies, on demands that broaden the struggle and on winning tactics and strategies are all needed. The goal must be to create the most dynamic, participatory and democratic movements possible with organizational forms that allow for discussion and debate. In various places popular assemblies have been created, such as the example that Chile provides.

"In my small neighborhood of Barrio Huemul, our cacerolazo spot in Plaza Huemul became the meeting place for our communal once (teatime) a few hours before the curfew protests began. Within a few days, the onces evolved into neighborhood assemblies. News spread across the country about the organizing of neighborhood asambleas (assemblies) and cabildos (open town halls)."

This is not a romantic concept from afar. In the struggle against the Mike Harris Tories in Ontario, in the 1990s, the top down ‘labour community partnership’ that the trade union leaders put in place kept things very much under their control. Had local anti-cuts committees or assemblies been operating throughout the province that involved real participatory democracy, the Ontario Days of Action campaign against the Tories would have been much harder to contain and to bring to a close. In a challenge to the Ford Tories of today, this consideration would be every bit as valid.

As the struggle escalates, people taking to the streets are ready to learn from those fighting back thousands of miles away. When people in Barcelona responded to the brutal sentences imposed on Catalan political prisoners, they shut down their airport as the movement in Hong Kong had done. A challenge to racist police terror in New York, directed at a black subway passenger accused of ‘fare evasion,’ employed the tactic of jumping the turnstiles that students in Santiago, Chile had used. That readiness to learn from each other and to build an international movement that challenges the neoliberal order is precious. We in Canada can draw lessons from that movement but there is no reason why we should not also provide a few of our own.