THE DANGEROUS RISE OF THE ANTI-VAX FAR RIGHT 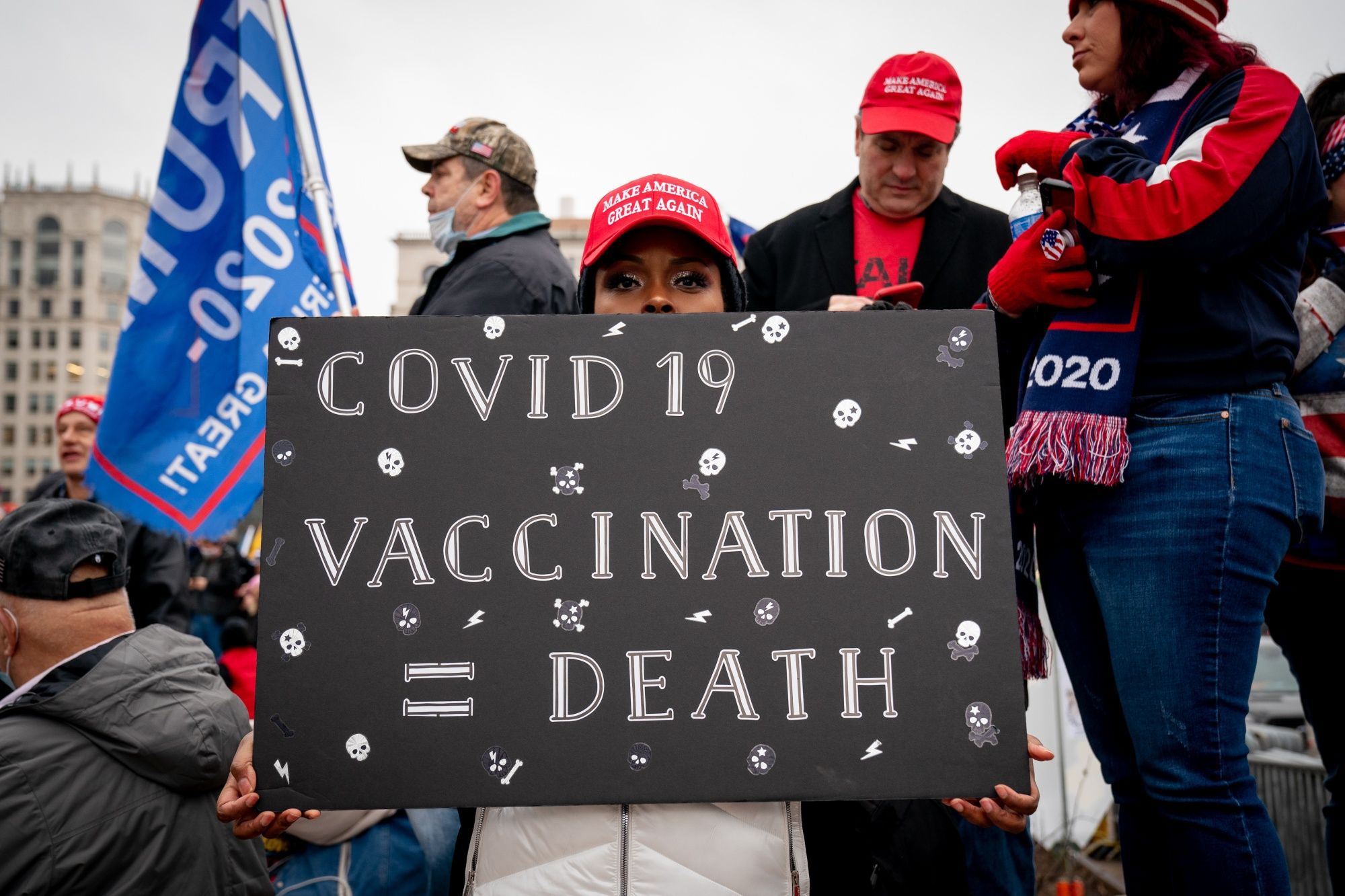 As the pandemic has spread across the globe, the far-right has been at pains to undermine vital public health measures. From fomenting rejection of face masks to fierce and sometimes violent opposition to vaccination efforts, white supremacists and fascists have spawned a veritable death cult of coronavirus denial.

It is clear that fascists are playing a leading and highly influential role in the anti-vax movement. Researchers recently analyzed some half a million comments on the social media platform Telegram that could be considered expressions of far-right political ideas. One of the channels of this platform experienced a ten-fold increase in subscribers when it focused its efforts on “COVID-19 conspiracy theories.”

Posts that were investigated “downplayed the severity of the coronavirus or pushed conspiracy theories about its origins” with overt and extreme racism frequently woven into the discussions. “Many of the posts contain hate speech directed at Jews, Asians, women or other groups.” One of these hideous messages went so far as to proclaim that “the Jews own COVID just like all of Hollywood.”

The far-right has by no means limited its efforts to expressions of hatred on social media, however. They have taken to the streets in country after country, often as the dominant force in angry protests against vaccination measures. In September, fascists in Australia took the lead in such a mobilization, and one report paints a grim picture of what took place: “In a frightening show of force, marauding fascist mobs have taken over the streets of Melbourne for three days running. They have smashed up union offices and occupied major arterials for hours. This is a disastrous development.”

Earlier this month, German police thwarted a plan by anti-vaccination activists to murder the state premier of Saxony that was linked to “an increasingly violent pushback against COVID-19 vaccination plans.” This violence has included an arson attack on a vaccination centre in Saxony as well as letters threatening “bloody resistance” against vaccination efforts that were sent together with a wrapped chunk of meat to various politicians, media outlets and public institutions.

Throughout Europe, the far-right has played a central role in organizing and leading protests, some very violent, against vaccination and other public health measures. In the United States, fascists have largely given up on peddling their claim that the last presidential election was stolen from Donald Trump and refocused their energy on the vaccination issue. False information on the vaccines are being circulated “in chatrooms frequented by all manner of right wing groups including the Proud Boys; the Boogaloo movement, a loose affiliation known for wanting to spark a second Civil War; and various paramilitary organizations.” Videos and articles are being produced with menacing titles, such as “Doctors and Nurses Giving the Covid-19 Vaccine Will be Tried as War Criminals.”

A right wing threat of this kind is also developing in Canada, as evidenced by a series of anti-vaccination protests held at hospitals across the country. Maxime Bernier’s People’s Party very deliberately cemented its alliance with the far-right by enthusiastically supporting protests against public health measures during the last federal election.

Opening for the right

As the pandemic began to grip the world, it was obvious that most governments would respond with, at best, reluctant measures of mitigation to prevent the collapse of health care systems and outright social breakdown. The tensions at play in this situation have expressed themselves in the form of sharp differences between somewhat more prudent political leaders and a thoroughly reckless ‘open for business’ right wing. Alberta Premier Jason Kenney can be considered the quintessential Canadian representative of this second grouping. Established politicians who are dismissive of public health measures have provided an enormously useful opening for the far-right in its quest for legitimacy and a receptive audience.

Indeed, the pandemic only intensified the opportunities for the far-right to operate across the increasingly blurred lines between fascism and the rightward edge of mainstream conservatism. The 2019 pro-pipeline United We Roll convoy was clearly a far-right undertaking, yet Tory leaders were drawn to the message of climate denial and resource extraction likes moths to a flame. For a time, fascist elements used western alienation and the Wexit initiative to find common ground with rightward moving reactionaries not yet ready to openly embrace far-right political pronouncements. These are Canadian examples but similar factors are at work in a range of countries.

COVID-19 has taken things to another level. It has involved, not only a drawn out public health crisis, but also enormous levels of economic hardship and these have, in turn, created moods of anger and uncertainty for millions of people. In this climate, anti-vax sentiment among those who gravitate to the right is hardly surprising, and gives the far-right a political wedge issue to work with. Some of the elements of this are worth considering.

So much of the opposition to vaccination draws on a distorted sense of individual freedom. The concept of freedom of choice is even pressed into service. Collective rights and responsibilities are roughly pushed aside and the claim to bodily integrity is put before community safety. This freedom to infect others with a potentially lethal virus is strongly suited to the worldview of the political right, and social media abounds with the most absurd examples of this perspective. One sign at a US protest against face masks proclaimed “My Freedom is Worth More Than Your Life.”

Another major drawing card for the far-right and its periphery is the long standing malignant fantasy of culling the supposedly inferior. The false idea that COVID is only a major problem for the elderly and those with serious health conditions has been used to suggest that the loss of that section of the population is a price worth paying for the sake of personal freedom and a return to business as usual. Indeed, another protest sign in the US emphatically delivered this message with a call to “Sacrifice the weak.”

Its historic function as a street army for capitalism notwithstanding, the far-right has always cultivated a perverse sense of plebeian pride and a distinct hostility to selectively constructed “elites.” This is very much part of the current anti-vax movement. Indeed, the idea has been twisted into a disdain for medical knowledge and scientific evidence. Conspiratorial notions of high-placed manipulators using vaccines as a method of control are grist for the far-right mill.

Opposition to vaccines and those who distribute them also provides that indispensable motivation for fascists everywhere: an enemy that can be demonized and used to generate a strong sense of identity and common purpose. The far-right has to tread somewhat carefully with those who like to keep their racism discreetly coded but opposition to vaccines is a far less ticklish matter. A strong sense of defending individual liberty from a dangerous elite enemy is a basis of right-wing unity and fascists can operate quite freely inside such a grouping.

The term “death cult” is entirely apt here. Capitalism’s assault on the natural world has unleashed the present pandemic and it is also producing an intensifying climate disaster. The working class response to this must be a struggle for a society that is based on rationality and justice where the needs of everyone are met. A movement with a distorted sense of individual rights that would seek to hamper vaccination in the midst of a global health crisis is reactionary to the core and hostile to human life itself. The dangerous rise of the anti-vax far-right is a symptom of a sickness in this society that we will still be confronting well after the last wave of the pandemic has finally receded.