THREAT OF INVASION HANGS OVER HAITI 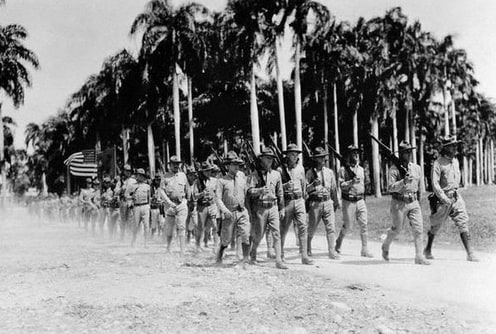 The present situation in Haiti shows how the ‘gunboat diplomacy’ of the twenty-first century conceals its brutal objectives behind false claims of ‘humanitarian intervention’ and support for ‘human rights’. The ‘spiraling economic, social, and political crises’ that the country is facing provide just such a pretext for further military intervention by a group of US-led imperialist powers.

With a view to preserving the polite fiction that is required in these situations, a suitably compliant local figure has been pressed into service to request external assistance. ‘Haiti’s de facto prime minister and president, Ariel Henry’ has dutifully called for international forces to deal with ‘gangs blocking access to gas and water terminals in Port-au-Prince.’ Yet, the unelected Henry, who has brokered brutal IMF austerity measures and created enormous poverty in the process, is deeply unpopular and propped up by the very powers that are preparing military intervention.

Care has been taken to focus on the issue of criminal gangs, a problem that has been generated by the economic hardship and political dislocation caused by imperialist domination. In conditions of induced chaos, gangs have been used as enforcers by state leaders and private interests, or have emerged ‘within impoverished cities and the countryside, mainly in the form of mafioso-like “protection” rackets.’ It is, indeed, the conflict between one such gang leader, Jimmy ‘Barbecue’ Chérizier, and Henry that has brought the present crisis to a head.

We may be sure that invading military forces will not limit themselves to controlling gangs, but that they will also be used to suppress the wave of popular opposition to Henry and his external sponsors, and ensure a domestic situation in which the unbridled exploitation of Haiti can be safeguarded. Any serious examination of the present situation and the factors that have driven it leads to the conclusion that the most dangerous ‘gangs’ operating in Haiti have their headquarters in Washington, Ottawa, and Paris.

It is important to recognise that the present threat facing the Haitian people is but the latest chapter in a long and brutal history of colonial domination and imperialist invasion. The Haitian Revolution that unfolded between 1791 and 1804 ‘has often been described as the largest and most successful slave rebellion in the Western Hemisphere.’ It freed the slaves and imposed a great defeat on French colonialism.

The French, however, ‘only recognized its independence on the condition that it repay the slaveholders for their lost “property,” trapping the country in debt ever since.’ A pack of imperialist countries, with the US playing an increasingly dominant role, worked to ensure that the subjection of Haiti was maintained. In this regard, ‘the US repeatedly intervened in the country, culminating in its invasion and occupation of the country from 1915 through 1934, during which it installed handpicked leaders, created the Haitian Army, and repressed liberation fighters.’

In 1957, the brutal dictatorship of François ‘Papa Doc’ Duvalier was imposed and the intense repression he unleashed was continued when his son took over. During the years when ‘Baby Doc’ held sway, state forces ‘killed as many as 60,000 Haitians in enforcing an economy of sweatshop underdevelopment that reduced Haiti to becoming the poorest country in the Western Hemisphere.’

In 1986, Duvalier was overthrown by ‘a mass insurrectionary movement’ and, following the first truly free and fair election in Haiti’s history, liberation theologist Jean-Bertrand Aristide became president. His reform agenda enraged Washington and every effort was made to compel him to adopt policies to its liking. Despite being forced out of office, Aristide was re-elected in 2001, so the US, Canada, and France worked together on a coup that saw him abducted and deported into exile in 2004.

The UN, functioning as a proxy for the major imperialist powers, imposed a scandalously brutal and corrupt occupation of Haiti that lasted from 2004 until 2019. Since then, the US and its key allies have brokered ‘a succession of increasingly illegitimate and unpopular governments that followed their neoliberal dictates.’ In doing this, ‘they incapacitated the Haitian state, privatizing its state industries and social services, and turned the country into what activists call a “Republic of NGOs”.’

This is the long and brutal process that has created the conditions of societal breakdown that are now being used as a pretext for yet more armed aggression against Haiti. The ‘Core Group’ that is working to set the stage for invasion can be traced back to an ‘Ottawa initiative on Haiti’ meeting that was hosted by the Canadian government a year prior to the 2004 coup that removed Aristide from office. The foreign ministers of the major predatory powers were in attendance at this gathering and their alliance has functioned ever since.

The Core Group, represented by the ambassadors of the US, Canada, France, Brazil, Spain, Germany, the EU, the UN, and the OAS in Haiti, decided who would step in as the country’s puppet leader, after President Moise was killed in July 2021. The group meets regularly to coordinate efforts to tighten the grip on Haiti, and we may be sure that plans for armed intervention are very much on the agenda these days.

It is likely that Canada will play a leading role in the attack on Haiti that is being prepared. At present, Justin Trudeau is working to try and ensure that some cloak of legitimacy can be afforded by ensuring major participation in the aggression by armed forces from the Caribbean countries.

The Jamaica Gleaner recently reported that ‘Prime Minister Justin Trudeau has, within a one-week period, held a second round of talks with Caribbean Community (Caricom) leaders on the rapidly deteriorating humanitarian and security situation in Haiti.’ The prime minister of the Bahamas stated that ‘If CARICOM decides that the Haitian situation requires the deployment of security troops, then The Bahamas will abide by the outcome of the organization’s resolution.’ The Jamaican information minister echoed this sentiment.

The Core Group of imperialist powers are tightening their grip on Haiti at a dangerous and volatile time. The leading player in the venture, the US, is aware that its days of unquestioned global hegemony are over. It is embroiled in a proxy war with Russia in Ukraine, and it faces a challenge from the economic strength and increasing international influence of China, such as is seen in the spread of the Belt and Road initiative.

The US and its junior partners are on a course of escalating confrontation with regional and global rivals. In this situation, Latin America and the Caribbean have long been viewed by the US ruling class as a core asset to be protected at all costs, a ‘backyard’ that should remain firmly under its control. The present effort to crush domestic opposition and ensure the firmest possible control of Haiti is developing in this overall context.

Last month, a demonstration took place on the streets of Haiti’s capital, Port-au-Prince, in which a coffin marked with the flags of the US, Canada, and France was paraded through the streets of the city. Those who carried it had no illusions about who is responsible for the harsh conditions of their lives and no doubt as to the nature of an invasion set in motion by these powers, however, it may be disguised and justified.

In a recent interview, Guerline Jozef, executive director of the Haitian Bridge Alliance, said that Haitians ‘are saying no to an invasion, no to armed invasion from the international community, because every time there is the so-called “help” invasion, people go to Haiti, it results in chaos.’ Another Haitian political commentator, Madame Boukman, has bitingly observed that ‘U.S.-style “humanitarian” intervention is like a massive blow to the spine.’

People in Haiti will resist in the face of the new attack that is being prepared, as they have fought back since the 1700s. We who live in the imperialist countries that carry full responsibility must do all we can to challenge the lies, the hypocrisy, and the greed for profits that underlies the looming invasion of Haiti.