A LEFT PERSPECTIVE ON VACCINE PASSPORTS 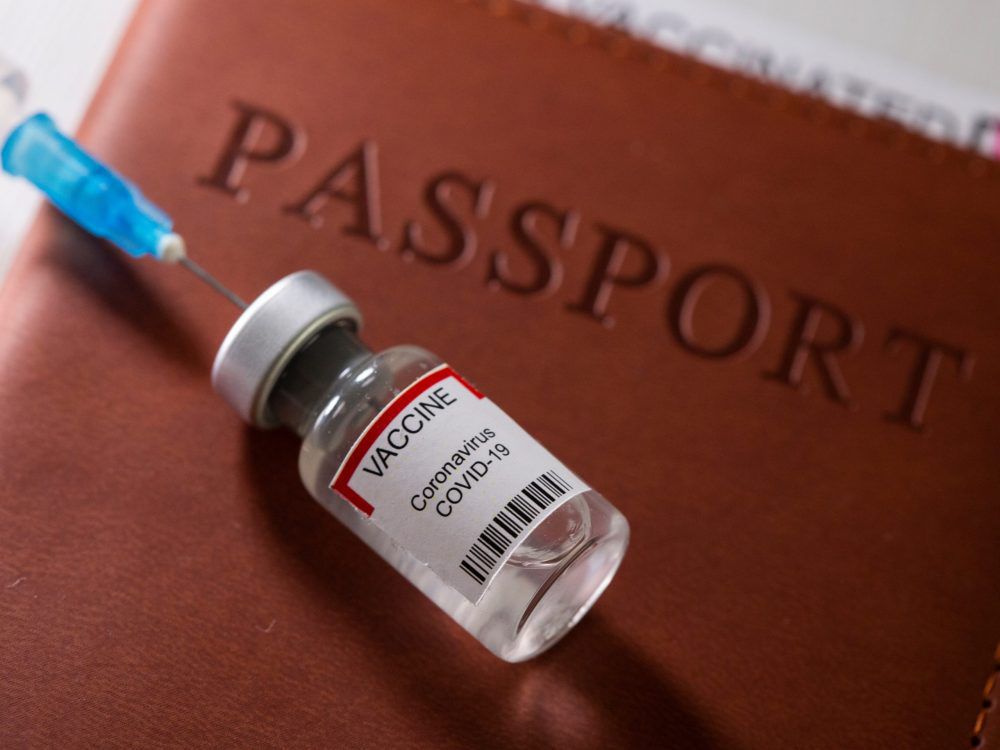 As the fourth wave of the pandemic takes hold in Canada, dominated by the highly dangerous Delta variant, the need to ensure maximum levels of vaccination is readily apparent. That the vaccines will significantly reduce the spread of the virus and massively lower the numbers of people who become seriously ill and require extensive medical intervention, is beyond dispute.

In this situation of public health crisis, with the wellbeing of communities at serious risk, the question arises of how to respond to vaccine hesitancy. If coercive measures are taken by the state to try and increase levels of vaccination, what approach should the left take? This, after all, is rapidly becoming a concrete and pressing issue. It has become a matter of sharp controversy in France, where Macron’s pass sanitaire has sparked protests by both right and left-wing opponents.

The “vaccine passport” is something that governments are moving towards throughout Canada. Québec is adopting a system that “will effectively bar people who aren’t fully vaccinated from many non-essential activities.” British Columbia has decided to limit access to business premises and some public events to those unable to show they have been vaccinated. Manitoba has drawn up a “list of activities and services that can only be accessed if an individual is fully immunized.” Saskatoon City Council will soon debate the introduction of compulsory vaccination for municipal employees and for those wishing to enter city facilities.

The Doug Ford Tories in Ontario had rejected such measures but came under considerable pressure, with some 34 medical health officers across the province calling for vaccine passports. Ford has now backtracked and an announcement is soon to be made on a vaccine passport system. Perhaps not surprisingly, the Kenney government in Alberta remains obdurate in the face of calls for vaccine compulsion but the very virulence of its opposition is an indication of how pressing the issue has become.

From the early days of the pandemic, there has been a strong right-wing push for a business-as-usual approach. The threat posed by the virus has been denied or downplayed and the line peddled that its unchecked spread within populations would build herd immunity, albeit at the cost of the lives of elderly and sick people. Hostility to all protective measures has been integral to this approach. Now, right-wing opposition to vaccination is becoming more aggressive, predictably presented as a defence of individual liberty.

Any approach that is based on principles of working class solidarity must surely reject the notion of a “right” to infect other people during a global pandemic. In our workplaces and communities, we need to be governed by a commitment to collective wellbeing. Just as we might form a picket line to protect the rights of workers, so we can demand a co-operative effort to prevent the spread of the Delta variant.

I’m not one to uncritically accept the authority of the state but nor do I think we can reject all measures that are adopted. People who drive should have headlights on their cars and be required to stop at red lights. I would also find it impossible to argue that refusing to be vaccinated, while insisting on being where you might make others sick, can be considered a protected freedom. In my view, those on the left who oppose a requirement to be vaccinated or the restricting of access to places where unvaccinated people are likely to infect others, on the grounds of challenging creeping authoritarianism or “surveillance capitalism” are simply disregarding the reality of this deadly virus.

We must do all we can to limit the spread of COVID-19, prevent even more terrible variants from emerging and save all the lives we can. Refusing to be vaccinated has real and terrible consequences and it is not possible to view it as a personal choice that we must come to terms with. However, while measures taken by the state to increase levels of vaccination are something we must support, the last thing I want to suggest is that we should trust those in political power or leave it to them when it comes to the response to the pandemic.

The Globe and Mail recently weighed in on vaccine passports and ran an article by a liberal political theorist that referenced John Stuart Mill and set out the “harm principle.” This was presented as the view that “individuals are free to do whatever they wish until and unless their actions pose threat to others.” This notion is not without a great deal of validity but, as far as this mouthpiece of the Canadian establishment is concerned, it settles the whole matter. Yet, for the left, there is a great deal more to be considered.

The state and the pandemic

The onset of the pandemic has driven home that we live under a social and economic system where profits are more important than human life. Industrialized forms of agriculture and the destruction of habitat have brought us into an era of pandemics, with the risk that “Future pandemics will emerge more often, spread more rapidly, do more damage to the world economy and kill more people than COVID-19.”

As the present global outbreak has spread through populations, it has followed the fault lines of social, racial and global inequality laid out for it by neoliberal capitalism. Governments have responded to this crisis with measures of public health protection that have usually been too little too late and these have repeatedly been lifted or eased far too soon. Rather than make a concerted effort to contain the virus, the approach has been to mitigate it to the point where economic activity could be maintained without ever fully bringing it under control.

To the extent that governments have had to implement lockdowns to prevent a complete breakdown of healthcare systems, they have fallen terribly short when it comes to providing social protections for those affected by these measures. Across Canada the threat of eviction hangs over tenants who have unavoidably fallen into arrears during this crisis. Temporary bans on evictions have only delayed the reckoning, since the rental debt has continued to pile up. In the United States, the Supreme Court has now opened the way for mass evictions.

When it comes to the vaccines themselves, those in political power have failed on a monumental scale. Before we consider the situation in a rich country like Canada, we must note that poor countries are being subjected to a regime of vaccine imperialism. In the interests of the profits of Big Pharma, their unvaccinated populations are being left to the mercy of the pandemic, with the great risk that the spread of the virus will generate variant strains that can’t be stopped by existing vaccines.

In countries that have acquired large scale supplies of the vaccines, it is simply not true that the problem of unvaccinated people can be reduced to right-wing denialism. People who face poverty and racism in their lives may have valid reasons to distrust the healthcare system. Hard pressed precarious workers may find it difficult to access the vaccine and lack sick leave protection if they suffer side effects. My own experience of the partly privatized vaccine distribution system in Ontario is that I had to make very significant efforts to locate and arrange for my two shots. A report in the New York Times looked at the socio-economic factors that inhibited access to vaccines and considered community-based initiatives that could be employed to overcome them. There is a great deal more that needs to be done to ensure that those who are especially vulnerable in the face of the pandemic have meaningful access to immunization.

There is another huge question that should lead us to distrust those in government, when it comes to the role of vaccination in combating the virus. While vaccines do limit infection and massively reduce the numbers of people who fall seriously ill, governments are now misusing the fact of widespread vaccination to return to another form of the herd immunity approach.

As the Alberta government removed vital measures that could limit the spread of the Delta variant, it seized upon vaccine distribution as a pretext for taking this deadly course. “Thanks to vaccines and the millions of Albertans who have been protected by them, we finally have the upper hand on this virus and can safely open up our province,” declared the shameless Jason Kenney. His government, however, is only an especially crude representative of this method of operating. The general trend now is to remove restrictions on profit-making on the spurious grounds that present levels of vaccination have all but defeated the virus.

The present situation with regard to the vaccines points to the need for us to distrust those in power and to act independently. If we are to keep our workplaces and communities safe, we can’t rely on employers, governments or cops. We should accept that getting vaccinated is a necessity, but through our trade unions and community organizations, we need to patiently explain why that is so and create a climate of opinion that overcomes hesitancy. We need to demand the resources and facilities to ensure that real and adequate access to vaccines is provided.

In this era of pandemics, there may be state measures we accept or even demand but we will have to act independently and in opposition to those in government if we are to survive in the face of a global health crisis that is far from over and that has the potential to become much worse.