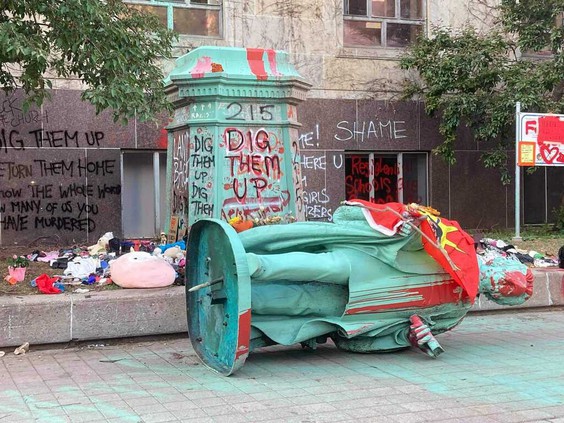 I won’t pretend to any impartiality when it comes to bringing down the statues of the ‘great men’ of imperialism and colonialism. Sometimes the authorities are forced to remove these symbols of racist triumphalism under the pressure of grass roots campaigns and, on other occasions, they are dragged down by way of bold and defiant direct actions. Either way, it warms my heart to see them fall.

This is a time when these horrible insults to human decency are coming down like ninepins. I live in Toronto and, this week, I had the pleasure of seeing the statue of Egerton Ryerson toppled at the university that, for the moment, still bears his name. It was even more beautiful to see the head of this architect of Canada’s hated residential school system on display at 1492 Land Back Lane, an ongoing site of Indigenous struggle.

It was inspiring to witness all this in the wake of the discovery of the bodies of 215 children who were buried on the site of the Kamloops residential school in BC. The ‘racist and colonial philosophy' behind these hellish places was Ryerson’s speciality and his overdue fall from grace is part of a welcome trend that has spread across Canada and internationally. This country's first Prime Minster, John A. Macdonald, a particularly vile white supremacist, is falling off his perch everywhere. In Halifax, the genocidal monster, Edward Cornwallis, who offered a cash bounty for Mi'kmaw scalps, had to be removed from his pedestal.

In the US, Confederate monuments, every one of them swaggering racist insults, are having to be taken down in large numbers, as are many of the sickening tributes to Christopher Columbus, a truly foundational figure in the implementation of genocide. In the UK, bold action by participants in a Black Lives Matter protest in Bristol, brought down the bronze tribute to Edward Colston, a brutal profiteer during the slave trade. He is now on display in a museum, with the triumphalism taken out of him. Meanwhile, the refusal of Oxford University to remove the graven image of imperialist mass murderer, Cecil Rhodes, is being challenged. This effort at Oxford takes its inspiration from the magnificent struggle to bring down Rhodes in Cape Town. For good measure, let’s celebrate the efforts to erase the disgusting tributes to Leopold of Belgium and the mountains of death and suffering in the Congo that he was responsible for.

‘Man of his times’

As we might expect, this drive to take down statues and eliminate other public tributes to vile figures from the past, is not universally supported. Many within the establishment fight to preserve their symbols of oppression but they face a bit of a problem in this undertaking because oppression today is generally a little better camouflaged. For this reason, the candid racism of those they have built tributes to can be rather jarring. Duncan Campbell Scott, for example, an icon of Canadian poetry and superintendent of residential schools until the 1930s, didn’t mince words in describing what he was up to. As he put it:

"It is readily acknowledged that Indian Children lose their natural resistance to illness by habituating so closely in the residential schools and that they die at a much higher rate than in their villages. But this does not justify a change in the policy of this department which is geared toward a final solution of our Indian problem."

Alberta Premier, Jason Kenney, who has few rivals for the title of most reactionary mainstream politician in Canada, recently penned an article entitled ‘Cancel John A. Macdonald and we might as well cancel all of Canadian history.’ Kenney's view is that Macdonald ‘was an imperfect man, but was still a great leader.’ He admits that his hero ‘took positions on issues at the time that we now judge harshly, and rightly, in historical retrospect.’ So, it is suggested that these dreadful figures were ‘men of their times’ whose words and deeds merely reflected prevailing views.

The problem with this argument is that it’s simply untrue. Macdonald was actually shockingly racist by the standards of his contemporaries. ‘He was the only politician in the parliamentary debates to refer to Canada as Aryan and to justify legalized racism on the basis not of alleged cultural practices but on the grounds that Chinese and Aryans were separate species.’ When Macdonald acted on his hateful views, there were those who opposed him. He was roundly condemned for the starvation conditions he imposed on the Indigenous people he forced onto impoverished reserves. An 1888 cartoon from a satirical magazine shows him and his Indian Commissioner holding bags of money while a starving Cree family stands behind them.

If we consider Egerton and the residential schools we find that, even within establishment circles, voices were raised against this brutal system. In 1904, Dr. Peter Henderson Bryce became the chief medical officer with the Department of Indian Affairs. Three years later, he issued a report exposing and condemning the conditions in the schools and he was driven out for his pains. When it comes to the dispute over the statue at Oxford University, it’s worth noting that a visit there by Rhodes, in 1899, to receive an honorary degree, led to 90 academics at the institution signing a petition against this event.

The views that marked the times in which these men operated can’t be assessed simply by noting objections that were raised within elite circles, however. Those who were on the receiving end of their racism fought back against them and displayed a point of view that deserves to be part of the historical record as well. The Matabele people in southern Africa resisted Rhodes on a scale that earns a place in journals of military history. Black people, forced into slavery, didn’t share Edward Colston’s notion of what their times should look like and they rebelled, even on the hellish slave ships they were transported in. Indigenous people in Canada had striking differences of opinion with Macdonald and challenged the order he represented.

A related reactionary argument is frequently raised that tearing down the statues of the ‘flawed but great’ is to ‘erase history.’ This is contemptible nonsense. Putting up statues or naming places after people doesn’t serve as a means to assess the role they played but, rather, it honours them. It’s very far from the case that these figures in history should be forgotten. On the contrary, their hateful words and terrible actions need to be understood far more widely than they are today.

The reason we should not forget the racist murderers, the colonial oppressors and those who traded in other human beings, however, is not simply because the crimes of the past shouldn’t be concealed. We want to ensure the past is understood for the same reason reactionaries like Jason Kenney want to glorify it. It’s because that past is the foundation of the oppression that continues in our time. The residential schools led to the abduction by the state of Indigenous children today. The slave trade and its champions paved the way for the anti-Black racism that deeply marks our society in 2021. The colonial brutality of Rhodes and his kind, led to the division of the world today into oppressed and oppressor countries.

We don’t want to forget anything about the past but we refuse to accept that those who played leading roles in furthering oppression and exploitation should be honoured in displays of racist triumphalism. We reject the celebration of past injustices because they led to those of the present and because we are fighting for a future that is cleansed of everything these monsters represent.