IS THERE A LUMPENPROLETARIAT? 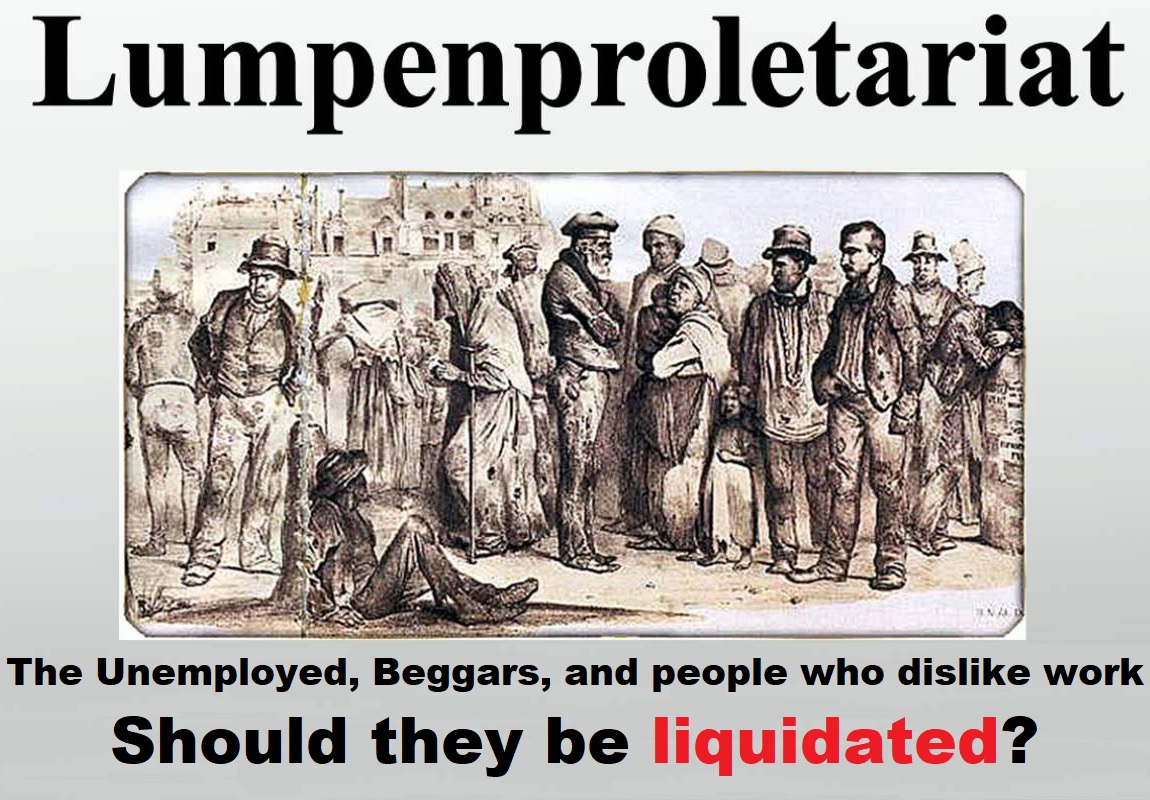 For over thirty five years, I was involved in efforts to build movements of resistance among unemployed, poor and homeless people. Twenty eight of those years were spent as an organizer with the Ontario Coalition Against Poverty (OCAP). I have always considered that work to have been part of an effort to mobilize a part of the working class to challenge particular forms of injustice and oppression but to do so in alliance with other parts of the class, including and especially unionized workers.

From time to time, as the struggles I was involved in unfolded, the question would come up of the concept of the ‘lumpenproletariat’. This took various forms, some of them quite absurd. I recall, in early 80s, having to deal with a group of left dogmatists in London, Ontario who opposed efforts I was involved in to form a union of the unemployed on the grounds that only employed workers could play any meaningful role in the struggle and that those who lost their jobs instantly descended into a declassed state in which only the far right could organize them. At the other end of the spectrum, I encountered community organizers in Detroit, during the 90s, who argued that the huge loss of industrial jobs had created a situation where the unemployed were now the vanguard of the class and the homeless were the vanguard of the vanguard. I continue to feel that there’s a more useful and realistic place to be found somewhere between these two extremes.

There are lots of examples of efforts to grapple with the role that can be played by those parts of the working class forced into unemployment, poverty and destitution. The Black Panthers, reflecting the reality that they were rooted in Black communities massively impacted by economic hardship and social abandonment, saw themselves as mobilizing a lumpenproletariat. They even had band called ‘The Lumpen.’ Questions of the exclusion of the poor and unemployed and criticisms of Marxist views of the lumpenproletariat have been raised in the context of the changed role of the industrial working class by Michael Hardt. Guy Standing, from the Basic Income Earth Network (BIEN), has tried to convince the global exploiters that gather at Davos each year that they must provide for the needs of what he calls ‘the precariat’ under the dire threat that this alleged new social class will fall prey to the lure of populism.

Marx and Engels did, of course, speak of the lumpenproletariat and developed some ideas around its role. However, as Jean-Claude Bourdin has pointed out, ‘Although some believe that the lumpenproletariat has an important place in the Marxist view of classes, the term is actually little used. Generally, it only features indirectly, when addressing the political issue of proletarian alliances.’ A concept of the ‘lowest sediment of the relative surplus population’ sinking into demoralization and susceptible to reactionary mobilization is advanced by the founders of Marxist theory but there is a great deal left for us to work out in the context of the class struggle in our own time.

Capitalism certainly does impose exceptional levels of economic hardship on a part of the working class and create conditions that can drive people into a state of atomized demoralization. A older trade union activist, who I greatly respected as a young man, once described the lumpenproletariat as ‘those people who have been fucked over so badly that the only thing they know is to fuck over anybody else they can.’ That seems to me to suggest something important when it comes to understanding this matter. The demoralized condition that can be described as ‘lumpen,’ is, in part, a reflection of how capitalism creates a surplus population that some remain part of permanently. However, the loss of class identity we are considering is by no means a given. Working class communities that retain bonds of solidarity and organizations that actively resist can and do counter that tendency.

Everyone knows of the relentless mass social action of the unemployed in the 1930s. This most frequently involved militant actions to defend those driven out of work from denial of benefits, evictions and other such attacks. Sometimes, however, it involved acting in solidarity with workers who were still employed. The landmark ‘Teamster Rebellion’ that took place in Minneapolis in 1934, saw unemployed workers bolstering the union picket lines in huge numbers. I wouldn’t be able to estimate the number of times that I, as an organizer with OCAP, have stood on union picket lines with poor and homeless people or, for that matter, been part of actions for those impacted by the poverty agenda that were joined by contingents of unionized workers.

Just as the level of exploitation of the working class is contested and can be limited and reduced by fighting movements, so the process of driving impoverished and destitute working class people into despair can be resisted through effective forms of collective action. Certainly, conditions of hardship and dislocation can generate divisions and racist scapegoating but they can also be the starting point for united action. Far right groups in the UK have reached out to homeless people, trying to channel their anger into blaming immigrants and refugees. Faith Goldy, during her bid become Toronto’s white supremacist mayor, ‘promised to evict illegals from Toronto's homeless shelters and give them back to homeless Canadians.’ Yet, even that part of the working class that experiences the greatest levels of poverty is not automatically going to be won over by the right. Class conscious and anti-racist working class resistance is quite possible, as I know from personal experience.

The neoliberal decades have seen a greatly intensified polarization in working class incomes and living standards. Precarious low wage work is now pervasive and the scale and depths of poverty have increased. The cost of housing has gone up dramatically and hugely increased numbers of working class people cling to housing in conditions of great economic hardship. The racism that is fundamental to Canadian society ensures that racialized and immigrant people face these conditions to a massively disproportionate degree. The colonial reality ensures that Indigenous people are greatly overrepresented in the part of the population that experiences poverty and homelessness. We must also be fully aware that the deep economic crisis that the pandemic has unleashed will mean that the challenges of poverty and destitution will become an even greater factor in working class life in the next few years.

In assessing how we build a united working class movement capable to fighting back effectively in the present situation, we should reject notions of an ‘underclass’ or a ‘precariat’ and we should avoid overhasty assumptions about a lumpenproletariat. On New Year’s Eve in 1912, in Berlin, scores of homeless people died of food poisoning in a homeless shelter, after they were fed contaminated food. Writing of this, Rosa Luxemberg, rejected the notion that this was simply a matter for social commentary but insisted that it had to be seen as part of the attack on the working class. She wrote,

"Today, we have to raise up these poisoned bodies of the Berlin homeless, who are the flesh of our flesh and the blood of our blood, borne aloft by thousands of proletarian hands, and we carry them into this new year of struggle by shouting: 'Down with the obscene social system that creates such horror!'"

The post pandemic reality is going to call for a rejuvenated, powerful and united working class movement that leaves no one behind. We need to put up picket lines to defend the living wages that union struggles have won but we also need to take action to block evictions, to take to the streets to demand decent unemployment and disability benefits, to resist the police persecution of poor and racialized communities and to occupy and open up housing for the homeless. We will overcome the threat of despair and demoralization by fighting for the interests of all working class people and conducting a struggle that all can be part of.