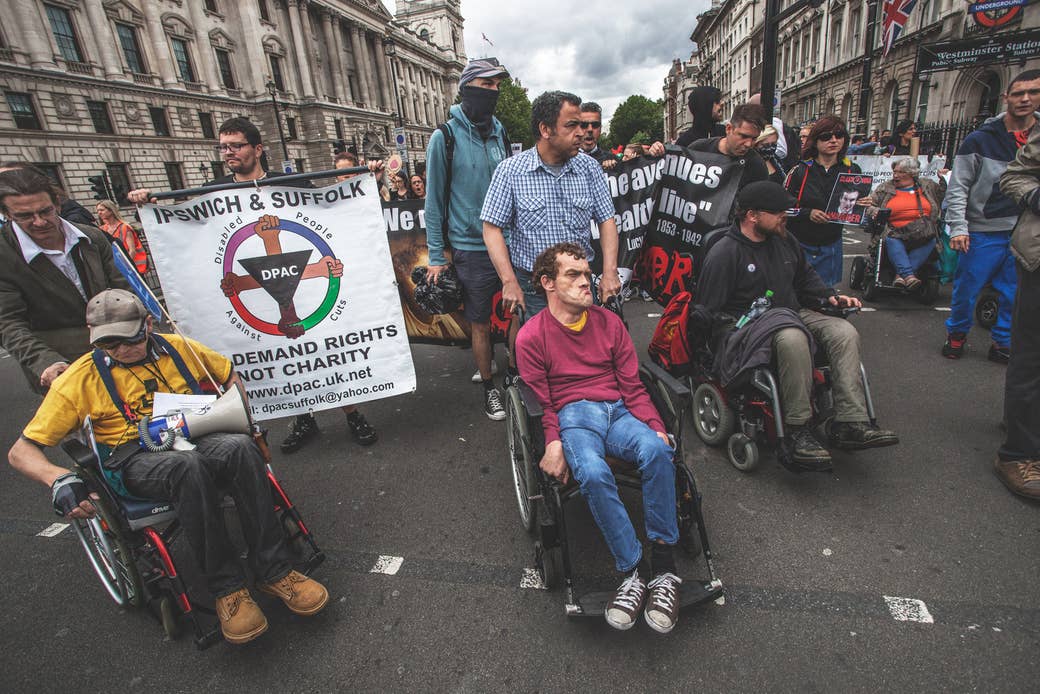 In December, Ontario’s Auditor-General, Bonne Lysyk, issued a report that offers the province’s right wing Tory government an opportunity to attack disabled people living in poverty. Her report paints a picture of an Ontario Disability Support Program (ODSP) that is handing out money hand over fist to the questionably disabled, without any realistic checks and balances. With this little effort, Lysyk has produced a masterpiece of selective reasoning. She simply assumes that an increase in ODSP caseloads in excess of population growth is an indication of something improper. Competent advocates immediately responded by pointing out the flaws in her logic. The growth of caseloads can be attributed to a range of legitimate factors, such as the driving of injured workers off of their benefit system, an ageing population and the considerable efforts that have been put into ensuring ODSP is more readily available to those with a very genuine need for it.

The AG’s report emerges just as the Ontario government is looking for a way forward with its project of right wing ‘welfare reform’ and an attack on disability benefits in particular. In 2018, the social services minister, Lisa MacLeod, seemed poised to proceed with a brutal and regressive redefinition of the concept of disability for those applying for social benefits. However, the crisis ridden and deeply unpopular Tories subsequently stalled on this initiative, unsure how to proceed. The political value of Lysyk’s ‘impartial’ hatchet job is, therefore, enormous. The attack on disabled people she is enabling, however, is very far from her personal initiative or even one confined to the present Tory regime. It has been brewing a long time in Ontario and is a key element of the international agenda of neoliberal austerity.

In 2012, the Liberal Ontario government of the day, received the Lankin Sheikh Report on social assistance. This, among other things, set out a series of ‘reform’ proposals for disability benefits that included the merging of ODSP with ‘short term’ Ontario Works (OW). The Ontario Coalition Against Poverty (OCAP) argued that this was a blueprint for trying to force disabled people to join the scramble for the lowest paying and most exploitative jobs, by rendering their benefits more precarious and inadequate than they already were. Playing with the title of the report, OCAP wrote an analysis of it called ‘Brighter Prospects for Cheap Labour.’ Faced with community and union opposition on the report’s proposals, the Liberals chose not to proceed with the attack at that time.

In Ontario, a full blown assault on ODSP has been avoided or at least delayed but injured workers who are forced to rely on the benefits provided by the Workers Safety and Insurance Board (WSIB) have faced an utterly brutal attack, with many denied income and 'deemed' capable of taking forms employment they can't possible secure. The model provided by this attack will doubtless help guide a broader assault on disabled people. Many other jurisdictions in Canada and beyond have moved against disability benefits as part of a more general austerity attack. In the UK, the war on disabled people has reached such extreme levels that a UN inquiry has even been conducted into this systematic cruelty that resulted in the issuing of a most damning report.

It has to be asked just why disabled people are under attack in this way and on such a broad front. What is driving political decision makers and the architects of austerity to place a premium on undermining sub-poverty disability benefits? As capitalist states, in keeping with the dictates of the neoliberal agenda, make ever more aggressive efforts to limit their role in the area of social provision, their reluctant commitment to benefit systems for disabled people becomes even more flimsy. However, the present round of social cutbacks, based as they so frequently are on limiting and redefining the concept of disability, is only the latest manifestation of capitalism’s ongoing project of socially excluding disabled people and regulating their lives.

Human societies have always dealt with members who had one form of impairment or another and there is evidence that the earliest human societies provided care for people with diseases and conditions that enabled them to live into adulthood.  Still, the notion that such impairment could be considered 'disability,' as understood in present day society, lay many years in the future. In feudal societies, the family or community group had to provide the landowning class with a portion of that which their labour produced. However, the exploiters were not interested in micro managing the process as long as they could take their cut. This meant that the producers could organize their collective work, in order to include but accommodate those who might have limited physical mobility or dexterity. With the development of the capitalist job market and workplace, however, this all changed. The capitalist or his overseer hired workers to engage in a highly regulated labour process and had no interest in employing anyone who didn’t correspond to the newly emerging concept of the ‘able bodied’ worker. As this idea took root, it was entirely inevitable that the excluded and rejected should be awarded the socially constructed title of ‘disabled.’ This term has consistently been measured up against the narrow and pragmatic standards of the job market but it has been adjusted to meet the particular needs of the different phases of capitalism.

The present neoliberal phase is, at root, a project devoted to restoring the rate of profit by means of the intensification of the exploitation of the working class. In this context, disabled people are to be pressed into service as low paid, super exploited workers or else the small share of the social wealth they obtain in the form of disability benefits is to be eliminated or greatly reduced. The cutting edge austerity attack in the UK has been accompanied by a concerted effort by political leaders and the media to foster the myth of the disabled ‘benefit scrounger.’ This has been conducted on such a scale and with such ferocity that hate crimes against disabled people have spiked alarmingly. Truly, the neoliberal age has no patience for sentimental Elizabethan notions of the ‘deserving poor.’

If we are to have any viable concept of a working class movement, it must surely be based on the famous and noble principle that an injury to one is an injury to all. A defence of trade union rights that doesn’t extend to resisting the abandonment of injured workers can only fall short. A struggle to defend public health care and education that is indifferent to the social abandonment of disabled people is fundamentally flawed. In the UK, where the attack on disability benefits has gone to such cruel lengths, organizations like Disabled People Against Cuts (DPAC) have taken up an inspiring and powerful collective resistance and given a vital lead in the broader struggle against austerity that we can all learn from.

As conditions of global economic downturn develop, we must expect governments to set an even more relentless pace in the imposition of austerity measures, with disability benefits as one major target. In this regard, Ontario’s Auditor-General points the way backwards towards a society that completely denies decent income and social inclusion to disabled people. This is a hateful vision we must reject and defeat. Disability benefits in Ontario, far from being overly generous, are grossly inadequate and too frequently denied to those who need them. Any attack on ODSP must be met with a strong and united social resistance.